It takes a special kind of political anorak to even know that the Co-operative Party exists; so you might be surprised to learn that it’s actually the fourth largest political party in Westminster.
Formed in 1917, it has been in a permanent electoral pact with Labour since 1927. In the current Parliament, 29 of Labour’s 250-odd MPs were actually elected as Labour & Co-operative candidates – including one Ed Balls. A good number of other Labour MPs are paid-up members of the Party, but aren’t actually sponsored by it. It depends on the Co-operative Group – yes, as in corner shops, banking, funerals, etc – for a large part of its funding.

And since I have a ‘loyalty card’ for my local corner shop, I suppose I should formally declare an interest: I am a part-owner of the Co-operative Group. A very, very, very small part indeed. But technically, still an owner.
For the past few months, Puffbox has been working alongside left-leaning digital specialist Jon Worth to help the Party up its game online. And in doing so, we had to up our own game too: it’s unquestionably the most intricate WordPress build I’ve ever done – with a multisite-based strategy, (double) wildcard DNS, four custom post types, two automated custom taxonomies, and a parent/child theme arrangement, both offering full visual customisation. See what I mean?
To give you some idea of how it all stitches together: each of the Party’s Parliamentarians has a ‘person page’. You can click on ‘People‘ in the navigation bar to see them all, or hover for various filtered views. Say, for example, Members of Parliament. Oh look, there’s Ed Balls. 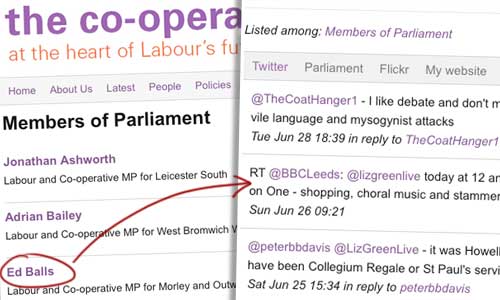 Click on his name, and you’ll see a ‘person page’. At the top of it are links to his Twitter account, and his personal website. Then there’s a concise biography. And towards the bottom, a ‘snapshot box’ for his latest activity on Twitter, in Hansard, on Flickr, and on his personal website, plus any content on the site itself which mentions him… all populated and updated automatically.

For those interested in the technical side: ‘person’ is a custom post type, with an extra metabox for the various external content sources. There’s a custom taxonomy called ‘role’, which is how we know Ed Balls is an MP. (And of course, each person can have multiple roles: here’s an example.) We pull the tweets in via JSON, to avoid API limiting; the other external data comes via RSS feeds. And of course, there’s a custom display template to stitch it all together. Meanwhile, invisibly, there’s also a people taxonomy on posts, which syncs with any changes to the person record.
And, uh, there’s something similar for areas of policy. But you’ll just have to work that out for yourselves. 🙂
The ‘main’ site will be complemented by a handful of distinct subsites, within the same WordPress multi-site install. There’s still some fleshing-out to be done, but you can see sites for the party in Scotland and Wales starting to come together. They use the same core theme, with the ability to change the background and header images; but will be managed on a day-to-day basis by the Party’s regional operations. Regular readers will recognise the influence of our work with Defra
Visually, it’s not the richest design I’ve ever done, but that’s entirely in keeping with the ethos of a party which doesn’t actually have a logo per se. We’ve kept things nice and simple, concentrating on clarity and ease of navigation. But as it’s turned out, there’s been a lot of very positive feedback about the look and feel, so we’re confident we got it ‘right’ for the client and their audience.
Thanks go to my own co-operators on this project: Simon Wheatley, for his technical assistance and inspiration. Jon Worth, for putting the project together. Martin at the Co-op Party (see his person page), who’s been an absolute star – and is already on his way to becoming a WordPress expert. And finally, to WordPress 3.x, without which none of this would have even been conceivable.