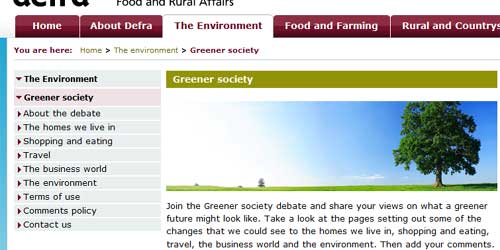 Delighted to note the Ministry of Defence’s decision to publish its new green paper in commentable form, using a restyled version of Steph‘s Commentariat theme for WordPress.
The MoD have been doing some excellent, if a little underpublicised, work with blogging tools – Defence News and a blog from Afghanistan, both running on a Typepad account; and Blogger-based initiatives from Basra and Helmand; not to mention efforts around YouTube, Facebook and so on. But I think this is their first WordPress-based work.
Looks to be sitting in ultra-cheap hosting space provided by Hampshire-based Justhost.com – £2.95 a month for unlimited disk space and bandwidth; although I think the server itself is in California.
Depending on your definitions, I think that’s now a majority of central government departments – or certainly very close to it, anyway – who have run public-facing WordPress-based websites.

Just to note that Defra is using WordPress to power its new consultation on Food 2030: a fairly straightforward use of Steph’s Commentariat theme, with a bit of Defra branding added. So nothing too clever, but as I’ve said before, I think it’s a very good thing if we’re clearly seen to be reusing the same code.
It’s not the first Defra use of WordPress of course; their third sector blog – in ‘public beta’ – has been pumping out the posts steadily since late 08, although comments are a bit thin. Both sites look to be on the same server, but the root URLs (‘blogs’ and ‘sandbox’) are not aliases of each other.
Oh, and I had nothing to do with either of them.

Over the last few weeks, I’ve been working with Ordnance Survey to produce a WordPress version of their new business strategy, published today. As you’ll immediately spot, it’s another piece of work based on Steph Gray’s Commentariat theme, including some of the tweaks I did for BERR’s Low Carbon Strategy.
As I write this, I’ve literally just pressed the ‘go’ button, so I haven’t even read the document yet myself, and can’t offer any opinion on it (yet). But I didn’t hide my disappointment at the unveiling of the OpenSpace project a year ago, and I’m told things have moved much further forward on that front at least. It hasn’t been enough to satisfy the Guardian’s Free Our Data campaign, though.
I know this is a subject of considerable interest to the e-government / activist community, which probably covers most of you reading this. We’ve created a web-friendly platform for you to read what OS are proposing, and tell them what you think about it. What are you waiting for?

A key element of the (re)statement of UK government open source policy the other week was the need to ’embed an open source culture of sharing, re–use and collaborative development’. That may have seemed like a waste of ink/bandwidth to those outside government; but I can assure you, I’ve sat in too many wheel reinvention seminars in my life already.
So Puffbox is glad to do its bit to get the wheels turning, by building and launching a couple of commentable documents using Steph Gray HM Government’s Commentariat WordPress theme, as seen on the (draft) Power Of Information Taskforce report. One is for DFID, on the elimination of world poverty; the other for Neil Williams at BERR, on the Low Carbon Economy. Wow, weighty subjects or what? – WordPress saving the world?!
Both are instantly recognisable as variations on Steph’s basic theme, give or take a bit of branding. This was a deliberate choice: I felt it was important for the sites’ origins to be immediately evident, as they needed to send a clear message about re-use, and the benefits in terms of speed and cost.
The DFID site was just another WordPress installation in an existing environment – the same one we’re using for DFID Bloggers, as it happens; the total cost to them will be one day of my time, covering WP setup and tweaks to the theme. And when you look at the functionality they’re getting for just a few hundred quid, it’s a pretty good deal.
The BERR project was slightly trickier. It was a new WPMU environment, always a little trickier to set up; and because the document wasn’t as long as other Commentariat instances have been, I had to re-engineer the theme to work off pages rather than categorised posts. I finished my bit in the final hours before dashing off on a week’s holiday; seeing the finished product on my return, I’m really impressed by how well it’s come together. Massive credit to Neil and the BERR team; the use of pictures really makes a dramatic difference.

Steph from the Department of Innovation is at it again. I’m really very impressed by his new WordPress theme, Commentariat, which effectively picks up where CommentPress left off. After an internal trial, he’s used it publicly for the first time, allowing people to comment on the Power Of Information Taskforce’s report.
I think he’s correctly identified the weakness in CommentPress: it isn’t meaningful to comment on individual paragraphs. Better instead to offer the content in editorially selected chunks. And that’s what Commentariat does. It makes commenting a breeze: I’ve just been through the entire POIT document, commenting furiously as I went… and I’ve certainly never done that before. The technology is irrelevant: if it’s getting me to contrbute like that, that‘s why I’d consider it a success.
I don’t understand the potential ins-and-outs of copyright (which will be the subject of another post in due course), but I really hope we can find a way to release this ‘properly’ as a theme offered through WordPress.org. It will genuinely amaze people to see HM Government producing something like this, and offering it free to the world. Who says we don’t ‘get’ open source?