Tom Watson, soon-to-be former Member of Parliament for West Bromwich East, has been the greatest advocate for, and representative of the ‘digital industry’ in the past few years: not just in his time as Cabinet Office minister, but just as much (and arguably moreso) in the period afterwards. I’ve no idea if he has been a good representative of the good people of West Bromwich; but I do know that he raised more issues of direct relevance to me, my work and my areas of interest than the MP who notionally represents me, solely on the basis of where I live.
So I’m intrigued by Tom’s move today, to ask the online community to help him draft a one-man manifesto on technology. He explains:

I want to stand on a platform that is avowedly supportive of the generation that seek to use the Internet to make the world a better place. To do this I have to be able to draw authority from an electoral mandate from electors in West Bromwich East. So I’d like to produce a leaflet that sets out what I stand for. It will be delivered to as many homes in West Bromwich as my campaign team can manage.

There’s a fascinating subtext to that plea: Tom clearly sees the representation of the digital community as one of his key purposes in public life, but he needs the electorate of a geographically-defined area to back him first. The message to the constituency is effectively that the country needs him, and they need to do their duty, whether or not they really understand why.
This is an idea I’ve been quietly contemplating for some time: the notion that a political system based on geographic location is increasingly anachronistic. The World Wide Web has reduced, if not eliminated the need to define oneself on the basis of place. If you’re supposed to judge me by the company I keep, that company exists – for the most part – ‘in the cloud’, not in the immediate vicinity of my house.
Which brings me to the concept of ‘functional constituencies’ – a term I came across in relation to Hong Kong, when working at the Foreign Office in the mid-1990s. Half of Hong Kong’s 60-seat Legislative Council is elected on the basis of geographical constituencies; the other half is elected by ‘functional constituencies’, defined by people’s professions or interests. So for example, there’s a ‘representative for accountancy’, voted in by 22,000-odd individuals registered as working in accountancy; and there’s a ‘representative for Information Technology’, voted by a combination of 364 institutions and 5,000-odd individuals. Wikipedia has the full breakdown.
There’s a not dissimilar situation much closer to home, in Ireland. The Irish Senate (or Seanad) consists of 60 people, 43 of whom were chosen by five panels representing – very broadly defined – vocational interests, and a further 6 by the graduates of two particular universities. (See Wikipedia for details.)
Neither system is perfect, with democracy campaigners seeking changes to, if not the complete abolition of the arrangements. And I’m claiming no expertise whatsoever in the design of democratic systems. But there’s certainly something appealing about a system that recognises – or can be made to recognise – that the nature of community and representation is evolving.
When the manifestos are published this week, we’re almost certain to see all three main UK parties offering proposals for an elected (or ‘mainly elected’) House of Lords. But a second chamber consisting of more members of the same old political class, no matter how proportionally elected, is not particularly enticing. I actually quite like the idea that the House of Lords includes appointees who have demonstrated excellence in their professional field; but I can appreciate that any system based on party nominations doesn’t exactly pass the democratic test.
So why not a system where professionals democratically select those from their own ranks, who best represent their community’s expertise, experience, knowledge and concerns? On the face of it, it has the potential to take representative democracy in a whole new direction, and make it more immediately relevant to all parts of society. Defining the right ‘functional constituencies’, and the eligibility criteria to become an elector for each, would be a hell of a job. But it couldn’t fail to end the notion of ‘them and us’.
Hey, we could even call them ‘peers’. 🙂

Nominations have closed for this, the tenth year of the New Statesman new media awards. So the winners of the five trophies are (theoretically) listed somewhere on this page. You might find a few gems you didn’t previously know about, but overall, I instinctively find the list a bit depressing.
Most nominees have only received a single nomination, in many cases by themselves, judging by the frequent use of the words ‘I’ and ‘we’. Most are pretty straightforward uses of off-the-shelf technology, by ‘one man band’ operations. And from a technical and/or creative perspective, most frankly aren’t great.
Maybe there’s a lesson in that. It’s now trivially easy to set up a passable website. Quality still takes time and skill, but you can get to the start line in next to no time, and with minimal up-front investment. From there, it’s really a question of the passion and commitment of the site ‘owner’, and its readership / community.
But I dare say it’ll be the bigger fish who will win. Expect at least one for MySociety. And I’d like to see recognition for the London Mayor ‘votematch‘ site, one of the few sites recently to really make me think. (The result it gave still haunts me.)

It didn’t generate much media coverage, but there were some stirring words in Gordon Brown’s speech on Saturday to the Church of Scotland general assembly. One of the recurring criticisms levelled against him has been a lack of a defining vision: well, try this one for size.

The greatest arsenal of power today is not nuclear or biological or chemical but people – the discovery of our capacity to come together across borders and oceans and to stand together as one. And what I want to argue is that the joining of these two forces – the information revolution and the human urge to co-operate for justice – makes possible for the first time in history something we have only dreamt about: the creation of a truly global society.
A global society where people anywhere and everywhere can discover their shared values, communicate with each other and do not need to meet or live next door to each other to join together with people in other countries in a single moral universe to bring about change. I believe that these vast and swiftly summoned movements of people coming together can now become the most powerful weapon for justice ever put in human hands.

It’s great to see a politician, the Prime Minister indeed, going a step beyond the ‘information revolution’ phase, and talking about the impact on society and human relationships both nearest and distant. Steadily we’re seeing The Establishment start to recognise how far the transformation goes. But one wonders if the PM will feel it even more directly after the Crewe by-election on Thursday night: the Tory bloggers, like the party they support, are pushing as hard as they possibly can.
Interestingly, what little media coverage there was – particularly in the Scottish papers – has been overwhelmingly positive for the PM; in stark contrast to virtually everything else from the nationals lately. ‘If Gordon Brown was Prime Minister of a better Britain, then his speech yesterday would have confirmed this son of the manse as the man Britain believes is right to run the country,’ writes Scotland on Sunday’s Kenny Farquharson. The Sunday Mail was even more direct: ‘On his home turf he showed that he is still the man to lead Britain.’ It’s not all bad out there.

In all the analysis of Ken’s downfall and Boris’s triumph, one element I hope doesn’t get ignored is the turnout. The RSA’s Matthew Taylor blogged on Friday suggesting it was the most interesting result of all, and I’m inclined to agree – although possibly for the opposite reason.
The London mayoral contest should have been the perfect electoral tussle. With all due respect to Paddick et al, it was always a two-horse race. Two instantly recognisable figures, well known by both broadsheet and tabloid readerships. A posh bloke versus a champion of the working class, neither of them ‘party men’. Plenty of real local issues to focus on. Plenty of media exposure too. A fairer electoral system, allowing you a ‘free vote’ for your first preference (with all the possibilities that offers) before casting your ‘proper’ second vote. And most importantly, an end result that was genuinely in the balance.
Yet it only stirred 45% of Londoners to bother to vote. Granted, this was up from previous years: 34% in 2000, and 37% in 2004. But it falls well, well short of the 70% we used to expect at general elections. And it means that, even taking both first and second preference votes into account, the winner only won the active support of 21.5% of the total electorate.
Of course we should be happy to see turnout rising. But it’s hard to imagine an election that could have been easier to ‘sell’ to the voters; and we only managed 45%. It’s not great, is it.

PS: Interesting to see the Tories heavily promoting their Twitter account on the conservatives.com homepage. We knew it was official, but I guess this makes it a formal comms channel for them… although I note the promo goes for the ‘subscribe via SMS’ approach, watering down the commitment to Twitter a bit.

Thanks to Jeremy for pointing out Harry Metcalfe‘s new ‘Tell Them What You Think‘, the latest mass screen-scraping exercise from the MySociety stable: this time, it’s government departments’ consultation exercises. I actually met Harry last week, but didn’t realise the project was actually ‘out there’. It bears all the classic MySociety hallmarks – which Harry should take as a great compliment.
Describing the story so far on the site’s own blog, he writes:

A few months ago, I responded to a couple of government consultations and, in the process, discovered there was no way to search all live consultations, or to be alerted when a new one was published. This struck me as more than a little mad. 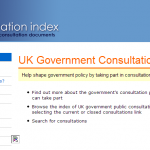 Except that, as web.archive.org demonstrates there was a central site listing live consultation exercises, at www.consultations.gov.uk from 2004 to early 2006. Did the site succeed in encouraging a new wave of civic engagement? Let’s put it this way: if it had, why would I be writing this? The site was then taken down, with the address redirecting into the Cabinet Office site.
Today, it redirects to the BERR page on last year’s Consultation Policy Review. And – oh! the irony – if you look at their published response, you’ll find the following paragraphs:

Visibility of current consultations is part of the problem, but I’d argue it’s a small – and maybe even negligible – part. I’m not even sure we know what they are trying to achieve: is it simply transparency of process? is it just ‘what we’re meant to do’? are we looking for huge volumes of responses?
And more pertinently, does the government really care what The Masses think? Harry almost acknowledges this himself to an extent, citing an example of a recent consultation which saw 85% outright opposition, and 91% disagreement with the phrasing of the question. What happened? The measure passed anyway.
We need to decide what we’re trying to achieve with consultation, then decide the best way to go about it. We’re a long, long, l-o-n-g way from there.
But there’s one important lesson from the exercise, as Jeremy notes. There are things you can do with your website to help the eage, public-spirited geeks take your information, and do something better with it. Ask them. And next time you spec up a website, make sure there’s a section on XML, RSS and/or API.