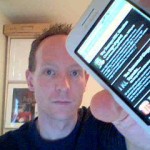 A few months back, I built and launched onepolitics: an automated website which pulled together the latest blog postings from the ‘proper’ political commentators. It wasn’t ever meant to be a mass-audience website: I built it for myself, but if anyone else wanted to use it, they were welcome. As I wrote at the time:

I’m finding myself looking at onepolitics during quiet moments through the day, purely to see what’s popping up. I’m kind of interested in this sort of content generally, but not enough to want to be disturbed by every new item popping up in my RSS reader.

I’ve found it really useful, so much so that I wanted it to give me more than the fairly restrictive content it offered. I was also noticing the limitations of the initial build, based on WordPress and the FeedWordPress plugin; and at the same time, realising the awesome power of pure RSS. Plus, with more political content going into YouTube, I wanted to add a video element. 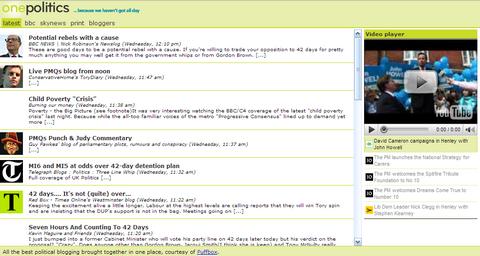 So in the last day or two, I’ve rebuilt onepolitics, dropping WordPress – see? it isn’t the answer to everything! – and driving everything through RSS feeds aggregated using shared labels in Google Reader. It now includes full representation of MainStreamMedia and ‘true’ bloggers. It should be faster to update, with the latest items appearing within five minutes of publication. It also includes an Ajax-style ‘video player’, showing the latest video clips from the parties’ official YouTube accounts. There are a few cute new design touches. The only flipside is, I’ve dropped the archive aspects… but looking at the usage stats, nobody was using anything other than the ‘latest’ list anyway.
The code is almost embarrassingly straightforward: it even relies on an old-school FRAMESET, for goodness sake. But it made things much easier to put together, particularly from a cross-browser perspective, and I’ve used a few presentational tricks to smooth the usability.
As before, it’s there if you want it. It helps me keep on top of what’s happening on the political blogs, and if it helps you too… great.

I’ve been looking at the various political party websites today, planning a possible enhancement to my onepolitics website. A few nuggets you might be interested in…

‘Staying on top of modern politics has become a full time job,’ declares the long-awaited PoliticsHome on its About page. ‘Things move too fast: it is too much for any single person to track.’ Unfortunately, the same can be said about the site itself: load up the homepage, and a torrent of headlines hits you head-on.  It’s overwhelming, and it leaves me dazed. I complained that the new Foreign Office site didn’t guide the eye: I take it all back.
There’s no doubt that, if a political story is out there, PoliticsHome has it in here, somewhere. Most of it is well-intentioned: the whole ‘live reporting’ aspect, a few ‘ticker’ areas, a nice grouping of the various sources’ coverage of the day’s big stories, a diary, a bit of story categorisation. A couple of ideas look familiar – the ‘newspaper front pages’ is a direct lift from my work at Sky News, for example.
But it looks like an ugly big database, more like a stock market terminal than a ‘super blog’, or an online magazine / newspaper. It’s hard to imagine a less engaging design; maybe they don’t consider that a priority. But having brought some famous faces on board, such as Andrew Rawnsley and former BBC man Nick Assinder, I’m surprised not to see them making more of the faces and their original material.
The idea of scrolling 100 items horizontally, in the window at the top of each page, is ludicrous; it’s utterly unusable. I’ve got a few issues with the technicals too: some page elements seem to refresh randomly, then there’s a brutal full-page refresh if you leave it five minutes. Quite simply, there are better ways these days.
I fear PoliticsHome has miscalculated. Politics is increasingly about personality, warmth and engagement. That’s why the blogs’ visitor numbers are growing (regardless of the accuracy of the specific figures). But PoliticsHome feels cold, functional and soulless. I don’t expect to use it.

onepolitics has competition. The Dizzy Thinks blog revealed at the end of January that Stefan Shakespeare (who previously brought you 18 Doughty Street and YouGov) is set to launch PoliticsHome.com, promising to be the ‘definitive portal to the ongoing political debate, edited by some of the UK’s leading political journalists and pollsters’. Then Guido published a screenshot a couple of weeks back (although his footnote that PoliticsHome ‘is not going to be the final name’ looks a bit shaky given the company’s later use of the URL).
First there was a job advert for ‘well paid part-time shifts‘ on the Work for an MP site, withdrawn early due to a high number of applicants. Now there’s an ad on the Guardian site, offering a salary of around £40k for a ‘Daily Editor to manage the newsroom and head up its website coverage’. But crucially, the ad notes, the site ‘does not produce its own content.’
Promises of a February launch look a bit optimistic now. But there’s clearly a lot of money going into this – and it had better be good, very good. Because in a matter of a couple of days, and using fairly straightforward technology, I produced a website which (if you don’t mind me saying) does a more than reasonable job of providing a ‘portal to the ongoing political debate’. Granted, onepolitics makes no attempt to offer a qualitative commentary on individual posts… but it could, if anyone fancies helping me construct a business model?

It wasn’t originally intended for public consumption, but today I’m unveiling a new website produced by Puffbox. onepolitics is an at-a-glance view of the latest posts on the growing number of political blogs being written by ‘proper’ reporters. You can wait until tomorrow to see what they say in print, or in tonight’s bulletin; or you can get advance warning from what they’re writing on their blogs.
In essence, it’s an RSS aggregator for people who don’t get RSS. I realised I’d written too many posts looking forward to the day when RSS would go mainstream – and it still shows very little sign of happening imminently. And all the while, I’m talking to public sector people for whom RSS is several evolutionary steps away. I’ve written quite lengthy explainers, covering the concept and the technicals, on the new site itself… so I won’t duplicate my efforts here. Suffice to say, it’s WordPress. But you all knew that already.
onepolitics is the first fruit of my promise to give myself some Google-style ’20 per cent time’; a project with a loose connection to my work, but no direct commercial application. But I’m starting to wonder if it might be of interest to clients. Press offices or stakeholder managers, maybe, who don’t yet have any kind of blog monitoring strategy. We could be pulling in any kind of RSS feed; and could be indexing them, or just listing them (as with the ‘meanwhile in the blogosphere’ box on the homepage). Even better, it’s almost entirely automated, updating in the background as often as you like.
It’s also making me wonder if there’s a need for a bridge between casual web surfing, with zero commitment to the site or subject; and the ‘need to know’ hunger for RSS subscriptions. I’m finding myself looking at onepolitics during quiet moments through the day, purely to see what’s popping up. I’m kind of interested in this sort of content generally, but not enough to want to be disturbed by every new item popping up in my RSS reader.
I’m making no promises about onepolitics. It is what it is, for now anyway. Please have a play with it, and tell me what you think. There are a couple of glitches I know about, and can’t really justify fixing, so don’t get too pedantic please.