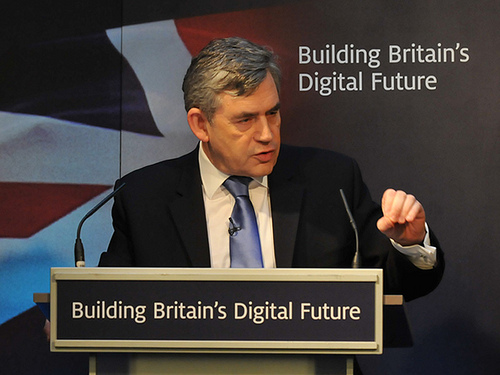 Gordon Brown’s speech, describing a vision of Britain’s digital future, is stirring stuff, with its pledges to make Britain a world leader in terms of digital jobs, public service delivery and ‘the new politics’.
The announcements and commitments came thick and fast – from the £30m to create an Institute of Web Science, to be headed by Tim Berners-Lee and Nigel Shadbolt, to confirmation of the release of ‘a substantial package of information held by Ordnance Survey … without restrictions on reuse’, to a ‘Domesday Book for the 21st century’ listing all non-personal datasets held by government and arms-length bodies, to an iPhone app for Number10, to an API on Directgov content ‘by the end of May’.
And then there’s MyGov – ‘a radical new model making interaction with government as easy as internet banking or online shopping.’ On the face of it, this seems – finally – like recognition that citizens’ expectations have jumped ahead of government’s delivery in the last decade. There wasn’t much detail in the speech – but it sounds to me like the first hint at Vendor Relationship Management, where the citizen shares his/her data up to suppliers. That’s certainly where the Times seemed to be pointing on Saturday, when it described the creation of a ‘paperless state’:

The aim is that within a year, everybody in the country should have a personalised website through which they would be able to find out about local services and do business with the Government. A unique identifier will allow citizens to apply for a place for their child at school, book a doctor’s appointment, claim benefits, get a new passport, pay council tax or register a car from their computer at home. … Over the next three years, the secure site will be expanded to allow people to interact with their children’s teachers or ask medical advice from their doctor through a government version of Facebook.

As I’ve written here before, I’m convinced this has to happen at some point. We build up personal profiles on Facebook, and allow Amazon and Tesco to analyse our purchasing habits – in return for much improved service. I just don’t think it’s sustainable on any level for government to continue to demand that we fill in lengthy forms, whether on paper or online, to get what we’re due.
But of course, that’s a huge government IT project, isn’t it? And by definition, that’s doomed? Well, there’s a blink-and-you’ll-miss-it line which suggests things might be changing:

This does not require large-scale government IT Infrastructure; the ‘open source’ technology that will make it happen is freely available. All that is required is the will and willingness of the centre to give up control.

Blimey: recognition that open source is ready to deliver the most visionary of government policy.
And with my WordPress hat on – do I ever take it off? – I can’t help smiling at his pledge that ‘no new [government] website will be allowed unless it allows feedback and engagement with citizens themselves.’
Of course, the speech has to be seen in context. Without ever mentioning the Tories, the speech was quite unashamedly party political in places: portraying the differing views of broadband expansion, or trying to match or trump Tory pledges on data transparency. It was also the speech of a Prime Minister staring at a huge public debt problem: and with neither tax rises nor spending cuts being palatable, that really only leaves technology-driven efficiency savings.
And it’s the context that’s stopping me getting too excited about it all. We’re probably a fortnight away from government pulling down the shutters for a month. In six weeks, Brown may or may not be Prime Minister, and may or may not be in a position to deliver on these promises.
Comparisons with the Tories’ technology manifesto are inevitable. In this speech, Brown blended small-scale but symbolic measures, like a Directgov API within weeks, with big-picture principles such as VRM. It’s both shorter- and longer-term than the Conservative document – attempting, perhaps, to outflank Cameron, Maude, Hunt et al on both sides at once.
But whilst they may differ on certain matters of implementation, both are heading – rushing actually – in the same basic direction. On the face of it, no matter who wins, we can’t lose.

I blogged previously about the House of Lords Information Committee’s inquiry into ‘People and Parliament‘: their final report came out this week, and couldn’t really have been more in favour of the ‘free our bills‘ agenda. Among its recommendations, as listed in the press release:

But there’s a lot more good stuff in it than just that (!). I note in particular the recommendation to take the Lords Of The Blog website further – incidentally, its recent facelift is a dramatic improvement (and I’ll be mentioning it in my WordCamp talk at the weekend); and the explicit commitment to allow people to embed video clips on their own websites, in a direct challenge to the existing (YouTube-centric) ban. (In fact, in their list of ‘action already taken’, they say ‘We have approved members uploading their contributions to the House’s proceedings onto YouTube.’ – so maybe the ban’s gone already, at least on the Lords’ side?
Never let it be said that politicians as a whole don’t get it.

When Andrew Stott was appointed Director of Digital Engagement, I commented that it wasn’t the ‘rock star’ appointment many of us had been led to expect. Well, the ‘rock star’ appointment came through yesterday, with the news that Sir Tim Berners-Lee as the government’s ‘expert advisor on public information delivery’. The Director position required evidence of having ‘run a public facing web site of significant size’: well, I guess TBL qualifies, having run the entire web at one point. 🙂
This is meant to send a loud and clear signal to the civil service: raw data now. And I couldn’t agree more; see this post, for example, from 2008 about ‘API-first publication’, in the context of the 2011 Census. But I think it’s more about how that signal gets sent.
The Cabinet Office press release says:

He will head a panel of experts who will advise the Minister for the Cabinet Office on how government can best use the internet to make non-personal public data as widely available as possible. He will oversee the work to create a single online point of access for government held public data and develop proposals to extend access to data from the wider public sector, including selecting and implementing common standards. He will also help drive the use of the internet to improve government consultation processes.

It reads like a rather hands-off, committee-based kind of role. And whilst that wouldn’t be a bad thing in itself, I wonder if it’s what The Machine really needs from him. What’s the question, to which ‘Sir Tim Berners-Lee’ is the answer?
I don’t think we particularly need the advice on standards; and I don’t know that TBL will be able to tell (checks the post-reshuffle situation) Tessa Jowell how to organise data publication processes inside the typical Whitehall department. But what he will be able to do is intimidate persuade those people who always seem to block the initiatives which have already gone before. He may have more success saying the exact same things many of us have already been saying for some time, because of who he is.
Stuart Bruce, who knows a thing or two about PR / technology / the Labour Party responded thus on Twitter: ‘Opening access to government data YES! Well done. But Tim Berners-Lee? Isn’t that just like Sugar, yet more cult of celebrity.’ Maybe so. Probably so, in fact. But it may be exactly what we need.

I wasn’t especially nice about the interim progress report on Power of Information Review, in that I didn’t see much specific progress being reported. So it came as a bit of a shock to discover, courtesy of the Open Rights Group, that there’s actually something really significant in it.
The interim report announced that:

HM Treasury and the Department for Business, Enterprise and Regulatory Reform (BERR) commissioned Cambridge University to undertake a study into the different models for charging for and defining public sector information. This is has (sic) been publicly released [External website].

I know, I know… that’s quite some call to action. You’re all simply dying to click on that link. But if you did, you’d eventually find your way to this report by three Cambridge University academics, published in late February, which concluded:

It was found that, in most cases, a marginal cost regime would be welfare improving – that is, the benefits to society of moving to a marginal cost regime outweighed the costs.
For registration based trading funds (DVLA, Companies House and the Land Registry) it likely (sic) that this change in charging policy could be made without the need for government to provide additional funds as any shortfall could be made up from the registration side of their activities.
For the other trading funds some direct assistance, beyond that already provided, would be required. In the case of the UKHO and the Met Office the sums involved would be limited (around £1m) but in the case of Ordnance Survey would be substantially larger (though the benefits in this case would be commensurably bigger).
One added benefit of adopting the marginal cost pricing scheme suggested by the analysis is that it would immediately address the competition concerns raised by the OFT as, a fortiori, outside organizations would now have access to ‘unrefined’ (‘upstream’) data on the same terms as the trading fund itself.

I’m no expert on all this stuff, but I know enough to recognise there are potentially staggering implications in this. And it’s surely useful ammunition for efforts like Free Our Bills.