Please, please, can we not have reshuffles on a Friday? The Cabinet positions were all confirmed by the end of the day… but the junior moves were certainly happening late into Friday evening, and one assumes, over the weekend. And whilst I’m sure a few government webbies were grateful for the weekend overtime, it does leave us in a situation where government websites left, right and centre are out of date – some more visibly than others.
I’m aware of two changes of interest to the blogosphere. Margaret Hodge, whose blog I only discovered the other week, will no longer be writing anything at all – having reportedly taken compassionate leave from her DCMS job to care for her sick husband, reportedly to return next year (?). And Tom Harris lost his junior position at Transport – breaking the news on his blog, naturally.
(Update: I’ve seen several suggestions that Tom H may have lost his position because of his blog; equally, there are numerous comments on the blog lamenting his loss. Tom picks out one particular comment, which is especially telling.)
I’m reliably informed that Tom Watson remains at the Cabinet Office, but has also been given a (party?) campaigning role. Details, though, are sketchy at best.
(Further update: Tom has now confirmed that he’s staying, and is happy to do so. ‘I’ve got some audacious plans for the digital engagement agenda,’ he writes. ‘It’s time to get people moving.’ Hmm, intriguing.)
It’ll be very interesting to see how it all pans out. The Guardian’s list is the most comprehensive I’ve seen so far (and yes, that does reflect badly on HMG). It’s immediately striking how many junior ministers are joint appointments across departments – perhaps most intriguingly Phil Woolas, whose role spans the Treasury and Home Office (where he’ll be immigration minister).

There’s plenty to say about today’s Cabinet reshuffle… and, frankly, plenty of other places to read it.
But of particular interest to this blog and this blogger, I note the move of Stephen Carter from his Downing Street strategy job to the House of Lords, where he will be the Minister for technology, telecoms and broadcasting. It’s being reported in some circles that this is a ‘soft landing’ after ‘no discernible successes’. It’s certainly a return to pastures old: Carter was the first chief executive of Ofcom, the regulator of telecoms and broadcasting.
I’m also hearing rumours about another change in the junior ministerial ranks, of even greater interest to us lot… which I’ll cover if/when it happens.
PS: Interesting to see the BBC’s ‘snaps’ (Twitter?) -style coverage of the day’s proceedings doing so well in their ‘most read pages’ ranking earlier in the day. They’re taking a leaf out of the Sport site’s use of ‘live text coverage’ on a Saturday afternoon… and it worked well. When there was something to say, that is. Similar snappy style on most of the big news sites – Sky , Guardian, various others.
PPS: I see the Department of Energy and Climate Change have got their new domain all sorted out before close of play: decc.gov.uk Still DEFRA nameservers though… 🙂

I haven’t yet seen official confirmation, but I’m reliably informed that Tom Watson is the new minister for e-government, post-reshuffle. The Cabinet Office website only says that: ‘Following on from Gillian Merron’s departure to the Department for International Development, Tom Watson MP has been appointed as new Parliamentary Secretary.’ And since she was responsible, it seems a safe bet that he is now. Watson, writing on his own blog, has only said that he has ‘some responsibility for technology projects’.
Tom Watson was famously the first MP to start a blog, back in 2003; he won recognition from the New Statesman’s new media awards in 2004. And already he’s putting it to good use, to try and engage with people like us:

If I was (smarter at all this stuff), I’d design a one page “Tell Tom” site where you could describe the project you think the clever people at the Ministry should be working on. A sort of “Fix my Street” for government web sites. All ideas welcome and who knows, you might actually make a difference.
(Tip for Tom: you’re using WordPress. Just create a ‘page’ rather than a ‘post’, and be sure to tick the ‘Allow Comments’ box – if, that is, your web designer has allowed for comments in the ‘page’ template, which he/she may not have done.)

This, of course, raises an interesting dilemma. Watson’s blog has always been unashamedly pro-Labour, anti-Tory: even in the last handful of posts, he’s been having digs at Iain Dale and David Cameron (reminding me of his apparent involvement in 2006’s notorious Sion Simon video). It’s generally good-natured, but it’s certainly party-political. So is it appropriate for him to conduct Ministerial business on the same blog?
I’m not trying to make a point by asking this question: just pointing out that Ministers face the same quandry as the civil servants. Tom clearly understands the territory, and it’s actually a great appointment from that perspective. But I’m more than curious to see how ministerial responsibility for government web activity will affect his long-running personal web activity.

Well, that’s a relief. With Peter Hain resigning at lunchtime, there was a rush of quite rational speculation that the Wales Office might be folded into a new ‘department for the devolved bits’, covering Wales, Scotland and Northern Ireland.
I’ve been doing a bit of work for the Wales Office over the last month or so, which I’ll (hopefully?) be unveiling at Saturday’s government BarCamp. I’m exceptionally proud of it, and I think it’s a potentially groundbreaking piece of work for e-government. But if Downing Street had announced the end of the Wales Office as a department in its own right, the whole point of my project would have disappeared. And for a moment this afternoon, it looked like my masterpiece might never see the light of day.
Paul Murphy, I can’t tell you how pleased I am to hear of your appointment. I note he’ll also be chairing a ‘new cross-departmental committee on IT and information security – although the grammar of the No10 announcement doesn’t make clear if it means IT generally, or IT security specifically. 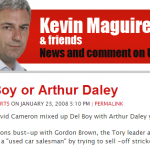 I’m sitting here at 6pm on a huge day in politics. A political heavyweight has unexpectedly resigned, freeing up two seats at the Cabinet table. We’ve got all the usual fun and games of the ensuing reshuffle – who’s up, who’s down, who’s been snubbed – and widespread speculation about a merger of several government departments, with an impact on the Ministry of Defence. It’s Gordon Brown’s first resignation, and there’s a good argument to say this is the blogosphere’s first scalp. It doesn’t really get any bigger.
Over at the Mirror’s ‘Kevin Maguire & Friends‘ blog? Nothing all day. Not a peep, from Kevin or indeed his friends. My advice to the Mirror: kill the site now. If you can’t make it work today, you never will. Shameful.