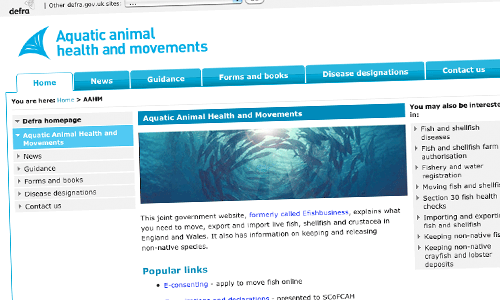 Late last year, Puffbox helped Defra move its main corporate website over to WordPress. One of the grand concepts underpinning the project was the use of WordPress’s multisite (formerly MU) functionality, allowing us to run multiple websites using the same installation. We launched with only one child site, for News – probably the easiest one, at that. But straight away, we began making much more ambitious plans.
Like everywhere around Whitehall, the start of a new tax year was to bring various contractual and organisational changes at Defra: and it was set as our deadline for the next phase of work, spinning off many more child sites. The good news is, all went well, and they’re now managing 20 distinct sites through the same WordPress installation – some carrying their own identities, some nested deep (and hopefully seamlessly) within the Defra design.
The first task was to rebuild the output themes from scratch – yes, already. For the initial launch, we had simply dropped WordPress code into Defra’s existing Dreamweaver-based output templates, and grafted some additional CSS on to their existing stylesheets, which were already in need of a good clear-out. They were never going to be able to support a platform consisting of literally dozens of child sites.
We now render the pages using something akin to a multi-level theme framework:

Needless to say, there are countless custom functions behind the scenes to stitch it all together – simple things like forcing a particular sitewide tab to be highlighted, to make a child site seem like it’s within a particular branch of the corporate site. (Although actually, that one wasn’t simple at all.)
And there are one or two new custom plugins which add pretty significant functionality, including one to implement a site-wide shared taxonomy. This has the potential to automatically surface related items across the network, and is pretty exciting – although we won’t see its benefits for some time.
As you can imagine, moving such a large quantity of material into such a radically different publishing model has frequently been challenging. We’re still finding our feet in certain areas, and it goes without saying, we’re pushing WordPress harder than ever. A few glitches here and there are inevitable; but we’ve had nothing too catastrophic. With a proper staging environment now in place, all our code being managed through Subversion, and a WordPress-based bug tracker to log any issues, it’s all gone relatively smoothly.
I can’t say enough about the contributions from Simon Wheatley and Team Defra; my front-end work was completed pretty early on, and I’ve really just been a spectator whilst the serious lifting and shifting has been happening. But once again, the Defra guys have been an absolute pleasure to work with, giving us more room to experiment and innovate than we’d ever dare ask for. Thanks guys.

One thought on “Multisite mania: the next phase of our WordPress work for Defra”