So Damian McBride appears to have been taken down by the blogger he was considering trying to emulate.
It’s being reported that McBride’s emails were sent from his official Downing Street email account. If so, that’s a naive error to have made: partly because it leaves him open to (valid) accusations of misusing public resources, and partly because it exposes him to the risk of exposure via FOI. Guido republished an email he had sent to McBride requesting ‘copies of all emails referring to either myself or my publication, “the Guido Fawkes Blog”… under the provisions of the Data Protection Act (1998).’ (Mind you, Derek Draper told Sky News tonight that his private email had been ‘hacked into’.)
It would have been an ugly and unpleasant story if he’d been a Labour Party employee discussing such tactics; or even if McBride had sent the emails in his own time, from his own email account. But it wouldn’t have been quite so explosive. And let’s face it, it probably wouldn’t have come to light. (Frankly, I assume such conversations happen all the time inside most political parties.)
So let’s clear up the technicalities. Someone created a new blog at wordpress.com, under the ID ‘aredrag’ at 4:24pm GMT on Tuesday 4 November – a free service with a minimally intrusive registration form. On the same day, before or after, someone using the pseudonym Ollie Cromwell registered the domain name ‘theredrag.co.uk’ – a tenner for two years through easily.co.uk. They then paid wordpress.com the $15/year fee to run a wordpress.com-hosted site under a different domain name. The site itself consists of a standard Kubrick template, with only the default ‘Hello world!’ post visible. It has a (very rough) custom header graphic, but beyond that, it’s as ‘out of the box’ as it could be. To me, it suggests someone who knows what they’re doing online; and in the right hands, it could have taken only a few minutes. It doesn’t necessarily imply a coordinated, organised, resourced smear campaign.
At its heart, this is a story about the thin line between politics and government – a subject often mused upon in these pages. Now of course, it’s not a new riddle. But it’s the fact that any individual, with no great financing or technical skill, can become a journalist and publisher in minutes that adds a new dimension. It allows McBride and/or Draper to contemplate setting up such a scurrilous website in the first place. And equally, it has brought mavericks like Guido Fawkes into the mix: independent, and with nothing to lose.
Numerous times, we’ve tried to draw lines separating party politics and public duties – MPs’ communications allowances, civil servants in quite obviously politically-focussed positions, Ministers blogging their political views, whatever. In this culture of constant communication, I’m wondering if that’s still possible.

There’s a long way to go on this one. A very long way. 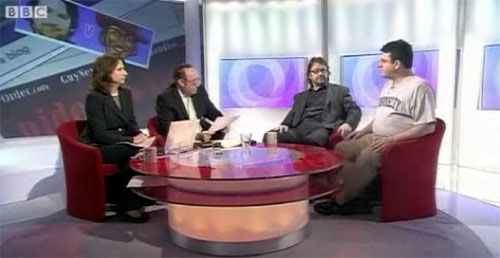 In the red corner, fighting out of Berkeley, California, the challenger – Derek Draper. His opponent, heavyweight champion of the Blogosphere, Paul ‘Guido’ Staines. Your referee for this afternoon’s contest is Mr Andrew Neil.
When the BBC’s Daily Politics finally brought two of political blogging’s most inflammatory characters face to face, sparks inevitably flew: see the full five minute interview here. It wasn’t especially enlightening: really just a chance to reheat the old, and frankly embarrassing playground spats of the past couple of months. That’s fine for a self-proclaimed ‘anti-politician’ like Staines; but not for someone like Draper, who’s supposedly trying to do something more edifying.
I was bemused by Derek’s continuing efforts to present LabourList as independent of the party, particularly this exchange on funding:

Or this remarkable about-turn:

DD: The blog is a collection of individuals…
AN: You don’t have a collective view?
DD: No, of course not! LabourList sometimes posts as LabourList…
AN: So it does have a view?
DD: Yeah, it has a view.

Then, as the interview approached a conclusion, Derek tries to turn the funding questions back on Staines: ‘When you set up Order Order, you were just out of being bankrupt, or a bankrupt. So where did the money come from?’ What, to set a rudimentary blog at Blogspot.com, Derek? To buy a domain name? And a Skype account? Actually, that statement probably reveals a lot about the Labour Party’s approach to internet activity. I’ll say no more.
Meanwhile, on the respective blogs, it’s getting very ugly. LabourList chose today to publish a dossier on Paul Staines, detailing ‘a shocking story of bankruptcy, law-breaking and friendliness towards the BNP’ – at least two of which, I’d have said, are totally irrelevant. Meanwhile, Staines has been out to California to do some dirt-digging into Draper’s educational background, with disappointing results both in terms of the lack of a confirmed allegation, and the quality of his video. Interestingly, for the first time I think, Staines has cast aside the Guido persona for both today’s TV slot and his YouTube video… continuing his journey into the mainstream media. One wonders where he’s heading?

One senses there’s not a lot of love between Guido Fawkes and Tom Watson. So it’s all the more remarkable that, within a few days, they’ve effectively reached an identical conclusion on the need for a better approach to public sector job advertising.
A week ago, Tom wrote a blog post noting the lack of a consistent approach on publishing job vacancies. I was one of several people to respond by noting that (in theory at least) there is actually a central website for all job vacancies already. Mind you, if only us insiders know, then it may as well not exist. Questions like this don’t get asked without a reason, so hopefully it’s the start of something significant.
Now this morning, Guido Fawkes has published details of his plan to bankrupt the Guardian, part of which is this:

One of the first thing the Tories should do in power is set up www.jobs.gov.uk. All available public sector positions would be listed there free of charge, this would save hundreds of millions in advertising costs for the taxpayer and deprive the Guardian of a critical revenue stream.

Aw, isn’t it sweet? Next thing you know, they’ll be playing football between the trenches. 🙂
The central website has been around since 2003 (at least), and in 2004 I was talking to them about the idea of ‘saved searches’ as RSS feeds. Departments could enter their results into the central database, then power a ‘current vacancies’ list on their own corporate website using the RSS feed. At the time, I only knew of one website offering such a service (Wired): it would have been cutting-edge. Now it’s a feature of many websites – TheyWorkForYou, BBC – and the RSS-processing part is almost embarrassingly easy. That’s before we get on to things like plotting vacancies on Google Maps…
Perhaps it’s an idea whose time has finally come. With the existing site basically unchanged in 5 years, it’s easy to justify a refresh. There are plenty of recruitment sites out there, from which to draw inspiration. There will be benefits in terms of customer service, staff efficiency, and defining best practice. We need concrete examples to show Whitehall that yes, it can be done.

Just to draw your attention to the latest website traffic numbers published by Guido Fawkes and Iain Dale. Now I’ve no desire to stir up previous arguments about statistical validity, certainly not here. But I do note Guido ‘s observation that his blog is now more popular than ITN, and Iain Dale attracts more traffic than the Guardian’s Politics site (excluding Comment Is Free, which may or may not be valid).
Guido uses this to lay down a challenge – ‘who is the mass media now?’ – whilst Iain observes that there’s ‘an increasing overlap, whereby bloggers are now writing for and appearing on the MSM with increased regularity and mainstream journalists are now blogging’. Fair points on both fronts.
Meanwhile, look at the numbers (in February) for the official party websites. Tories top, BNP a close second, Labour a distant third. All well behind the site for a man we can’t even vote for over here, though.

Interesting to note some of the attempts to ‘live blog’ the election results last week – with Guido Fawkes, Slugger O’Toole and ConservativeHome all using CoverItLive‘s fantastic liveblogging ‘app’. Needless to say, there’s significant variation in the tone of each site’s usage.
Of course, it’s ironic to note both having a pop at Gordon Brown’s leadership when, dare I mention it, it was a Downing Street website – produced by yours truly – which first brought this technology to the attention of the UK political scene.
Now Iain Dale’s gone a bit CoverItLive-crazy, using it as an ad-hoc chatroom facility. It’s not really what it was intended for, and it’s probably quite hard work for Iain and colleague Shane Greer to moderate, but it does the job I suppose. They’re making good use of the popup polling mechanism, it must be said.
Correction: It took a heck of a lot of digging to find it, but I discover that ConservativeHome did use the CoverItLive tool back in January. My apologies; a straightforward Google search didn’t reveal it. I’m grateful to Guido for the advice to the contrary.

From the ‘you can’t win’ department… Guido today picks up on a piece by Shane Greer last week, claiming that ‘Brown uses Downing Street (web)site to promote Labour’. And what incendiary partisan material are we talking about, precisely? An external hyperlink.
The No10 site has a page of Gordon Brown’s speeches. Or strictly, as it states in the page’s first line, non-political speeches. If you heard that Gordon Brown had made a speech, it’s the logical first place to look. But what if the speech had been made in a party-political capacity? It would be wrong for No10 to carry that speech on their website. And nobody’s suggesting otherwise.
So what do you do – present people with a dead end, or try and be helpful? It’s not as if they don’t (or rather, didn’t) make clear that you’re crossing the line from government to politics. As Shane’s screengrab shows, the link stated: ‘political speeches at the Labour Party website’. And in keeping with the site’s approach to external links, it opened in a new window. Hey, there’s even a page explaining why they have to be selective about the material they carry, with links to both the Ministerial and Civil Service Codes.
Shane asks: ‘What exactly is the justification for using taxpayer (sic) money to drive traffic to the Labour Party website?’ Well, there are two.

The link has now gone. Party politics 1, common sense 0.
But let’s not pretend this is a Labour thing. I worked in government comms as far back as 1995. People would call up, asking for speeches by Conservative ministers – notably during the party conferences, but not exclusively. We either produced a transcript scrubbed clean of party-political material; or we gave them the number for Conservative Central Office. It was the right thing to do. Were we using taxpayers’ money to help promote the Tory Party? By Shane’s argument, yes. Sorry.
Disclosure: Although I’m doing some work for/with the No10 web guys, I don’t have any inside knowledge of this matter. I haven’t spoken to them about it, and was not involved in this decision in any respect.
Disclaimer: Although I’m linking to their websites in the text above, I do not endorse the views expressed by Shane Greer or Guido Fawkes. My company, Puffbox Ltd, is not using its proceeds or resources to promote either Mr Greer or Mr Staines. Just so we’re clear.