Wednesday saw the formal launch of London’s crime maps, which first appeared in beta only a couple of weeks back. Don’t call it ‘1.0’ though: the source code declares it’s actually ‘beta 1.02’.
As before, it shows areas colour-coded for the rates of ‘burglary, robbery and vehicle crime’, based on comparisons with ‘the average’. Yes, that’s an approach which has its limitations – my favourite being that areas containing police stations tend to rate worst for offences, because of (for example) finding drugs on someone you’ve just taken into the custody suite. But as a first step, it’s surely a good one. There are plenty of legal and logistical issues to overcome before we start putting dots on the map according to offences… and as we all know by now, if you try to sort everything out before going live, you never go live.
No mention of the total cost in the official press release, but I’ve seen a figure of £210,000 reported (eg Daily Mail). Given that it’s a fairly straightforward map mashup, using the standard infoWindows and polygons built into the (free) Google Maps interface, I’d be very interested to see a confirmation and/or breakdown of that. Fair play to Boris and his Conservative administration for getting it out the door early; but the next ‘how much did that government website cost?’ argument could be interesting.
Meanwhile, I see the Foreign Office is doing some map mashing of its own, with a cute (rather than useful) map of travel advice notices for the home nations’ World Cup qualifiers. But crucially, they’ve done it using the free ‘My Maps’ functionality; and it’s offered purely as an external link, not even an embed on the FCO page. 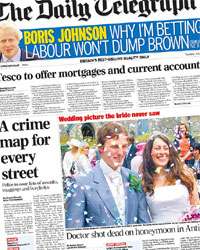 A Home Office press release this morning makes the explicit pledge: ‘Every neighbourhood in England and Wales will have access to the latest local crime information through new interactive crime maps. […] By the end of the year every police force area will produce crime maps which will allow the public to see where and when crime has happened, down to street level for some crimes; make comparisons with other areas; and learn how crime is being tackled by their local neighbourhood policing team.’
On the face of it, that’s brilliant news. But five months to do this? That’s brave – especially when we’re looking at some pretty fundamental legislative questions, as highlighted on the Power of Information blog last week. The Guardian’s Free Our Data campaign blog has a few recent items along similar lines.

The Home Office is confirming that it’ll press ahead with online crime mapping, as recommended by today’s Casey Report on Engaging Communities in Fighting Crime.
Even better, the Power Of Information taskforce – specifically Will Perrin and Tom Loosemore, in apparent association with designers Schulze and Webb – have posted a few concepts showing not only the mapping of crime data, aggregated to postcode sector; not only an overlaid layer of data showing public facilities such as schools, pubs and cash machines; but also the ability to actually do something as a follow-on. I’m especially intrigued by the RSS icon: blogging bobbies, perhaps?

Judging by the mockups anyway, we’re looking at some serious interaction potential: polling on local priorities, emailing the local policing team or your local elected representatives. (Never mind the possibility of interacting with the data.)
It’s not the first time some/most of this has been proposed: whilst working at National Statistics, I was involved in the concept work which ultimately led to the disappointing Neighbourhood Statistics. It’s not as if we didn’t have some of these same ideas… but mashing-up has come a long way since then, thanks particularly to Google Maps. I note the ‘presumption’ that Google’s technology would underpin these maps… another nail in Ordnance Survey’s coffin?