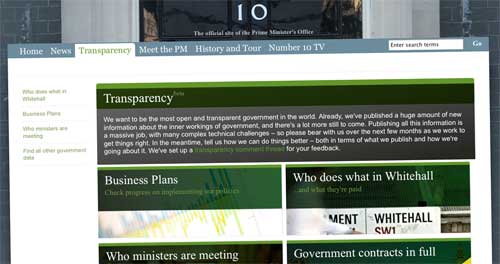 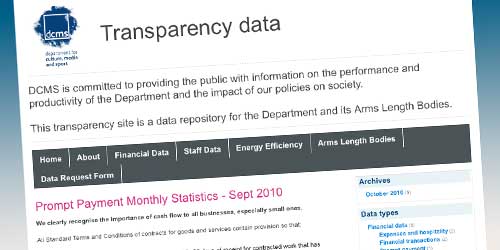 Nice to see the team at the Department of Culture, Media and Sport launching a new WordPress-based site this week, for the distribution and archival of their transparency data. They promise the monthly publication of financial data, with others ‘as appropriate (at least annually)’. Data is being posted as CSV, as per official guidance, and uploaded as attachments to WordPress posts – meaning it can be viewed by (hierarchical) category, and/or month of publication, or via RSS feed.
In fact, it’s precisely the model I’ve been discussing with the Wales Office, for implementation in the next week or two… although in their case, we’ve been using categorised WordPress posts for two and a half years, integrating things like FOI disclosures into their news stream; so it’s really just following an established model.

It’s a nice touch to see DCMS using a government-developed WordPress theme – namely, the Digital Britain/Clean Home design by BIS. The site looks to be hosted at Rackspace, like Culture’s (ASP-based) corporate site… What? WP on a Microsoft IIS7 server? Hey, why not – WordPress doesn’t have to sit on Linux, and Microsoft have been love-bombing the WordPress community recently. Having said that, I still feel somewhat uncomfortable at seeing a WordPress logo on a microsoft.com page. (If you’re determined to run WP on Microsoft, this site will be useful.)
If you’re coming along to the Word Up Whitehall event on Wednesday, you’ll be able to ask CIO Mark O’Neill all about it.

The coalition’s Programme for Government stated that, as part of the government-wide transparency and open data initiatives: ‘We will require public bodies to publish online the job titles of every member of staff and the salaries and expenses of senior officials paid more than the lowest salary permissible in Pay Band 1 of the Senior Civil Service pay scale’ – namely £58,200.
In a letter to all government departments on 31 May, David Cameron stated that these should be ‘published from September 2010‘. Well, we’re now into October, and said data hasn’t emerged.
I’m not entirely surprised to hear from well-placed sources that whilst the mechanics of releasing such data are fairly straightforward, the practicalities haven’t been. It would be very, very easy indeed to pinpoint exactly how much even relatively modestly-ranked individuals earn – so it’s no surprise that it has caused some, ahem, ripples. (It’s still happening though, as I understand it.)

Some excitement this morning at the publication of names, positions and salary bands of the civil service’s top 172 earners. A few names familiar to anyone reading this blog – Matt Tee, John Suffolk, Vanessa Lawrence, Alex Allan (one for the old-skool there!) – but mostly, it’s departmental Permanent Secretaries, and very obviously senior staff. The MoD and Cabinet Office have the most people on the lists: the former mainly ‘top brass’, the latter mainly lawyers. In truth, I’m not sure there’s an awful lot to get excited about.
The real fun will come in September: it was stated in the Programme for Government, and has now been confirmed in a letter from the PM, that:

Names, grades, job titles and annual pay rates for most Senior Civil Servants and NDPB officials with salaries higher than the lowest permissible in Pay Band 1 of the Senior Civil Service pay scale to be published from September 2010.

And according to the Civil Service website, the bottom of the SCS band 1 payscale is £58,200. That’s going to mean the full salary details of many mid-level managers – quite a few of you reading this blog, I’d guess? – being published in full. Brace yourselves.
We’re getting a new committee – to include Messrs Shadbolt, Berners-Lee and Steinberg – tasked with ‘setting open data standards across the public sector and developing the legal Right to Data’; and a promise that full departmental organograms will be published in October.
But perhaps the most intriguing line is the one buried near the bottom of Cameron’s letter: ‘From July 2010, government departments and agencies should ensure that any information published includes the underlying data in an open standardised format.’ Open? Standardised? Would one expect Microsoft Office formats to meet those criteria? I’m not so sure. 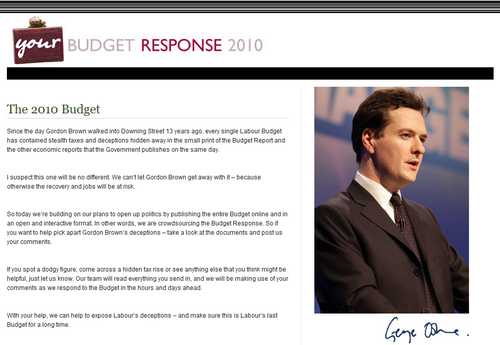 Following the apparent success, back in December, of presenting a leaked draft of the government’s IT strategy for reader comments, the Conservatives have repeated the trick by laboriously scanning every page of the Budget book, and presenting them on commentable WordPress pages.
They aren’t asking for email addresses on comments, and aren’t posting the comments when they’re submitted – citing a desire to protect the ‘anonymity [of] those who have sensitive insights’. It turns WordPress into an inbox filtering application, in effect: recording people’s submissions against the page to which they related, but not really doing anything more than that. Nothing wrong with that approach, just a little curious.
Again, I applaud the Tory team’s ingenuity here. But… writing on the Conservatives’ Blue Blog yesterday, Jeremy Hunt said:

We will be publishing it online in an easy-to-read format (not like the enormous PDF documents so beloved of the Treasury) as soon as possible after its release.

Now, there’s a lot wrong with publishing stuff purely in PDF files – and there’s a lot right about doing this site in WordPress. But PDFs have several huge benefits which this image-based site can’t match. Copy-and-paste, search, screen-reading, search engine indexing… etc. Plus, without wishing to be too pedantic: if ‘enormous’ is a reference to file sizes, the Treasury’s 3.5MB PDF file equates to significantly less than 230 JPG images of roughly 150kB each.
Leaving aside the technicals, this is a very interesting initiative on several levels. There’s the ‘crowdsourcing’ aspect, of course; but there’s also an underlying message – that Labour will be trying to sneak the nasty things through in small print on page 186. They do, after all, have a certain amount of form on this.
So is this a declaration that under the Conservatives, they’ll tell it to us straight – good and bad? I sincerely hope so.

It’s well worth reading the two memoranda issued by President Obama yesterday, on – ironically, given yesterday’s events – FOI and transparency. There’s nothing about them on the White House website (???), so I’m grateful to this Washington Post blog.
On Freedom of Information:

In our democracy, the Freedom of Information Act (FOIA), which encourages accountability through transparency, is the most prominent expression of a profound national commitment to ensuring an open Government. At the heart of that commitment is the idea that accountability is in the interest of the Government and the citizenry alike. The Freedom of Information Act should be administered with a clear presumption: In the face of doubt, openness prevails. The Government should not keep information confidential merely because public officials might be embarrassed by disclosure, because errors and failures might be revealed, or because of speculative or abstract fears.
The presumption of disclosure also means that agencies should take affirmative steps to make information public. They should not wait for specific requests from the public. All agencies should use modern technology to inform citizens about what is known and done by their Government. Disclosure should be timely.

It’s almost impossible to pick out highlights from the memo on ‘Transparency and Open Government’: it’s all good. But if I really had to pin it down:

The choice of language is deliberate and forceful. Well worth bookmarking these documents, and quoting them whenever possible.

I draw your attention to Early Day Motion no 1037, lodged yesterday by Peter Kilfoyle MP and signed by more than 50 MP colleagues: at the current count, 51 Labour and 1 LibDem (Lembit, before you ask).

That this House deplores the innuendo of the blog of Nick Robinson, the BBC’s lobby correspondent; calls upon him to substantiate the imputations he makes in his blog concerning the Speaker and hon. Members; and also calls upon the BBC to publish a full, itemised account of the expenses of Mr Robinson, in the name of transparency and accountability of public funds.

This follows Kilfoyle’s submission of a comment on the offending post on Nick Robinson’s blog, barely an hour after it was posted. Nick reflects on the kerfuffle here. Personally, I don’t see why Kilfoyle’s getting so worked up: if someone said I was crap at my job, I’d probably be less inclined to be nice to them. Still, I guess it’s all an interesting step forward.
Incidentally, Mr K: be careful what you wish for. BBC Radio Ulster presenter Conor Bradford was interviewing the DUP’s Gregory Campbell MP on precisely this subject. As the Belfast Telegraph reports:

During (the) debate on air, Mr Campbell had been jibing him about BBC secrecy policy on presenter pay when Mr Bradford defended his position. “Look, I earn £29,000 a year for my Good Morning Ulster contract,” he said. “That is not hidden, that is open for everyone to see. That is my salary. Have you got any problems with that?”

Mr Campbell, the article also notes, ‘rents his constituency office from his wife and employs her in a secretarial role.’