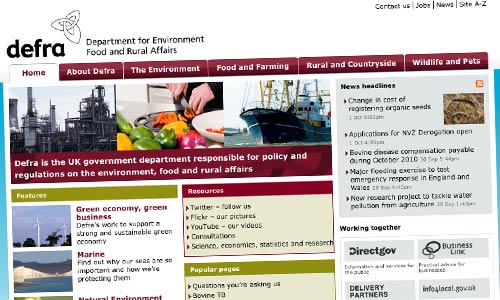 This morning saw the launch of a new website for Defra, the Department for Environment, Food and Rural Affairs. It looks remarkably like their old one, which was placed in suspended animation after the election. Almost identical, in fact. But behind the scenes, it’s a completely different story.
Thus far, Defra’s website has largely been managed manually, one page at a time, using Dreamweaver. They started using WordPress two years ago: first a blog, then a Commentariat-based commentable document. Puffbox got involved about 12 months ago, helping develop a couple of microsites. And internally, they’ve been running a few pilots, notably with their press office. It’s all been building up to this morning’s unveiling of a new corporate website structure built on a WordPress 3.0-based multisite install.
The ‘top level’ consists entirely of pages (rather than posts) – a fairly modest number to start with, but all thoroughly reviewed and re-edited. Beneath this will be a collection of subsites, of which only one is in place so far, but it’s probably the most significant one – News. There’s a parent theme plus one child theme; most of the presentational elements are defined either in the parent theme, or the ‘top level’ site’s settings. But of course, the subsites also feed content up to the top in some places, such as the News area of the top-level homepage.
It feels like we’ve pushed WordPress to its limits on this one, or certainly closer to its limits than we’ve ever gone before. Files and images are uploaded and managed through WP’s interface, allowing us (for example) to generate and summon thumbnails of multiple sizes for the homepage, whilst storing the highest-resolution images for unspecified future use. 😉 We’re making heavy use of WP3.0’s new ‘custom menus’. We do intend to use comment functionality, although not for ‘conventional’ commenting. And of course, the whole concept is based on WP3.0’s multisite function: I wouldn’t have been comfortable building this on pre-3.0 MU.
Meanwhile, behind the scenes, we have multiple load-balanced servers, and all sorts of WordPress caching magic – which, although it doesn’t sound exciting or glamorous, is what really lifts this project into the realms of serious web serving. Hopefully by now, you won’t be in any doubt that WordPress can do plenty – but the question often arises, can it do it at scale? Yes it can – but it’s much, much more involved than simply installing a plugin or two. (And sadly, I’ve seen too many instances lately where developers without much WP experience haven’t appreciated that.)
There’s so many other little things I could mention: a quick custom plugin to do X, a little widget to display Y, a dash of jQuery to do Z. And then there’s the other things we’ve built, but haven’t used or activated quite yet. In fact, to be honest, it’s a little frustrating that so much ‘cutting edge’ stuff is concealed behind a year-old front-end.
Mere words are not enough to express my gratitude to Simon Wheatley, whose genius was only exceeded by his dedication on this one. The Defra gang have been fantastic too: they’ve done great work over a long period to reach this point. And they gave us more freedom than we would be entitled to expect, to do it ‘our way’. Thanks, everyone.