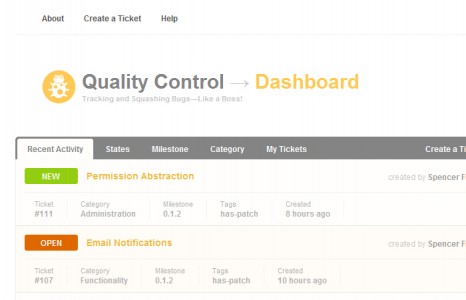 We’re heading into the final furlong on one of the biggest projects Puffbox has ever been involved in. All being well, we should be able to talk about it in a week or so. Trust me, it’s significant.
The stakes with this job are higher than most; so I wanted to take testing and bug-tracking a bit more seriously than usual. I had the idea the other evening to use WordPress as a centralised bug-log: and my initial thought was to use the Twitter-style P2 theme, by Automattic themselves. To be honest I’ve never really liked it, but I can appreciate its extra functionality – front end authoring, ajax comments, etc; and I’m sure we could have made it work.
But maybe someone had done a proper bug-tracking application on top of WordPress? One quick Google later, I found that yes, within the last month someone had… and it’s truly fantastic. One of the most inspirational pieces of WordPress work I’ve seen in months.
It’s called Quality Control, and it does everything you’d want it to do. Installation is a little bit fiddly, but nothing too onerous; set up a page to act as the ticket creation screen, define a few ‘states’ and ‘milestones’, and you’re away. Once it’s up and running, you shouldn’t ever need to look at wp-admin: everything is front-end. And as you’d expect, it’s all comment-able and feed-able, with email notifications, etc etc.
There’s a live online demo – so rather than me explaining how it works, go and try it for yourself.

One thought on “WordPress as bug-tracker”