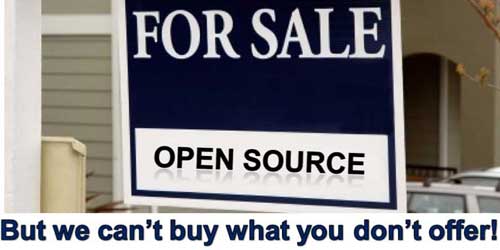 a dressing down in which the big 12 systems integrators, who supply 80 per cent of all government IT, were told firmly that they were preventing the government from carrying out its policy and had better change their ways.

The Home Office’s Tariq Rashid, described as ‘helping the Cabinet Office unearth the reasons why systems integrators have ignored the government’s open source policy’, told CW ‘there had been more pressure from Number 10 over open source than there had been from the Cabinet Office’. (A statement backed up by Sirius IT, who were also in attendance.)
Slides from the event name Qamar Yunus (ex Identity & Passport Service) as the ‘Government Open Source Lead’, and refer to a Government Open Source Advisory Panel – although I’ve seen no membership list for the latter.
CW has also published the government’s draft Assessment Model for open source, and list of ‘approved’ open-source software – although the latter in particular is very draft indeed. Take this entry on ‘web’ as an example: 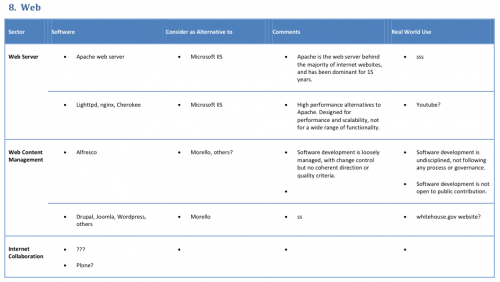 To be honest, it’s slightly depressing that the best example they could quote for Drupal or Joomla or WordPress (note: small ‘p’) was the White House – with a question mark, for some reason – since our own head of government blazed the trail for use of open source well before; and indeed, Cabinet Office themselves recently shifted over to Drupal. That’s before we get on to the countless examples of each one elsewhere in HMG and on its fringes. You’d almost think they never read my blog.
But thankfully, there’s a direct quote from Tariq Rashid:

If the Cabinet Office starts producing an assessment model to separate good software from bad software, looking at things like support, how established is it, is there good governance around development, these sorts of things. That would enable customers to say, ‘We want to use WordPress and according to this model it’s not going to fail’.

When Chris Chant spoke at UKGovCamp, my question to him was: we’d heard various commitments to make greater use of open source over 3-4 years; what was going to be different this time? Well, to his team’s great credit, this is something we haven’t had before – in effect, an ‘app store’ of recommended open source applications. To anyone who knows the territory, it’s embarrassingly basic – but what matters is the Cabinet Office logo which will go on the front cover.
To be completely frank, though, there’s a major concern for me in all this: the prospect of big ugly consultancies deciding to sell open source into government, in precisely the same way they’ve sold proprietary-based solutions beforehand. If we’re seeing open source as a way of not paying expensive software licenses – then yes, on one level, it is. But there’s so much more to it than that.
Open source, fundamentally, is about the people. And it’s not just geeks in their back bedrooms these days: it’s about serious, commercial, profitable businesses – but businesses with a very different mindset to the conventional IT consultancy. Agile, innovative, collaborative, JFDI, call it what you will: I don’t often see examples of this approach among the major SIs.
Have a look, for example, at the speaker lists at the BCS Open Source Specialist Group‘s two meetings on the subject: one earlier this week, one next week. Atos Origin, IBM, Hewlett Packard, Fujitsu. Can we expect behemoths like these to offer the kind of response – and frankly, the total price tag – that you’d get from a small operation (yes, like Puffbox, but other suppliers are available) with roots already deep in open source? I’m afraid my own recent experience says not.
This is the right thing to be doing. I’m afraid I remain to be convinced that these are the right people to be doing it.