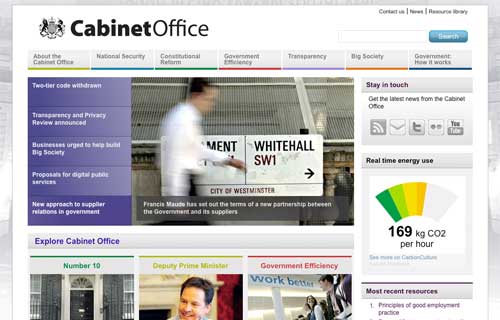 Make no mistake about it: today’s launch of the new Cabinet Office website isn’t just a much-needed facelift for the least usable departmental site in Whitehall. It’s a signal of things to come.
The new site is pretty, modern, and at first glance, very well put-together. There’s evidence of planning for re-use, with the simultaneous launch of a nearly-but-not-quite identical website for the Deputy Prime Minister. Good integration of social stuff, and multiple RSS feeds. And all built on an open-source publishing platform. Specifically, Drupal.
I’ve been sensing a steady shift towards Drupal at the Cabinet Office (and in its immediate vicinity) for some time now; and in fact, I’m told this project has been running since before the election, not always smoothly either. But things can only have been accelerated by the arrival of the Conservative team – including Rishi Saha, who masterminded the MyConservatives.com system, also built on Drupal.
Now the Drupal platform is in place, don’t be at all surprised to see Downing Street going down the same road; ‘practise what you preach’ and all that, given Martha Lane Fox’s pronouncements on the desirability of (total) web convergence. And then?
I’m delighted to see them coming over to open-source: a move, of course, effectively announced by Francis Maude back in June. Of course it would have been nice if it had been WordPress rather than Drupal, for reasons I’ve written about before. But that’s no reason not to welcome this as another step forward. Good on them; and I hope it works out. We’ll find out how much it cost in a matter of weeks, no doubt.