I’m very impressed by what I’ve seen thus far of the Sky By Broadband service. Once you’re through the tortuous (and apparently hit-and-miss) sign-up process, which requires your Sky TV viewing card number; and once the whopping 50MB download is complete; you’re into a Flash-driven interface which delivers what it promises. 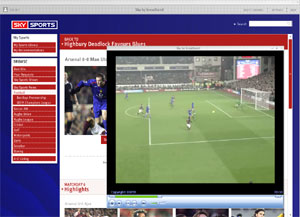 I’m not a Movies subscriber, so I’ll concentrate on the Sport. Granted there isn’t a huge amount to see there at the moment; but crucially, it’s clear that the rights issues have been sorted out. If you want to see highlights of the tedious 0-0 draw between Arsenal and ManU the other week, you can. It all gets streamed via Windows Media Player, with the ability to go full-screen; I’m seeing a variable bitrate of between 500 and 700 kbps, which gives a very good quality image in most cases.
Clips can be ‘bookmarked’ and ‘downloaded’ to ‘My Library’; and there’s a simple ‘My Recommendations’ page driven by any keywords you choose to identify. It’s a pretty healthy mix of sports from the Sky portfolio; great especially if you’re a fan of rugby (either code) or darts.
Overall – it’s very hard to knock this, especially given that it’s free. Well, ‘no additional charge’ if you’re already a Sky subscriber. I suppose it has to be seen as a defensive move by Sky, suddenly wary of cable’s natural advantage in terms of interactivity. But you know what? I’m very grateful. It all looks good so far.