Canberra is planning on doing a GOVUK: developing a single ‘Whole-Of-Government Content Management System’ for Australia. And they’re very clear on what they want: ‘The solution must use Drupal open-source software‘.
Why Drupal? They’ve published a detailed report (PDF) on their decision. They had two key requirements: that it must be ‘truly Open Source’, and very much unlike GOVUK, that it ‘must not be a .NET or Ruby based solution’. Well well well.
There were 18 options on a long-list:

which they assessed using various criteria, and came up with the following scores: 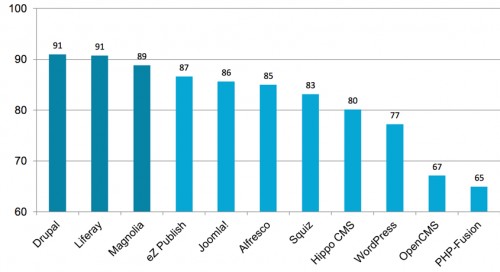 The top three were then considered in more depth, with Drupal actually coming out third of the three in most cases, and its user experience coming in for particular criticism. But in the end they’ve opted for Drupal primarily, it seems, because of the availability of extension modules and (local) developer resource.
Obviously it’s more than a little disappointing to see WordPress ranking so low: but not entirely surprising. Nobody is currently tasked with representing the WordPress platform as, say, Acquia does for Drupal. (By the way – have a look at the list of open job vacancies at Acquia, including many in the UK. And compare that to the equivalent Automattic list. Quite a contrast in approaches.)
But it’s a victory for Open Source nonetheless – and an explicit recognition of the value of the sizeable community behind the Drupal platform. It’s exactly what I talked about in 2011, when I took GDS to task for building the GOVUK platform from scratch, ignoring the benefits (immediate and future) of working with an established external platform. And took a fair bit of flak for it.
It gets better: they’ve posted an explicit commitment to feed back into Drupal core. ‘It was unclear whether GovCMS intends to give back to the community,’ they admit: ‘it was always a clear intention of GovCMS to do this, we have made the statement more direct, and the Draft Deed of Standing Offer document clarifies this requirement further.’
If you fancy the work, tender responses need to be in by the end of the month.

Courtesy of a retweet via @DirDigEng, I see the Australians have launched a shared WordPress platform for use by government agencies. The installation, known as Govspace, was apparently opened in May this year, and currently claims to be supporting 30 ‘spaces’ (ie blogs) – some of which, I think, have been imported from other installations.
At first glance, it seems to be a pretty straightforward v3.0 multisite build, running on Apache – so I’m not sure I’d agree with the suggestion that it’s its ‘own version’ of WordPress. But there’s some nice customisation in terms of themes: agencies are offered a selection of government-branded custom themes, although many appear to have brought their own; and there are some quite nice-looking (but sadly unreleased) in-house plugins – plus a set of pre-installed third-party plugins (not all of which I’d agree with, FYI). Full details on the Features page.
(They’ve helpfully included a screengrab of an options page: here, and in a few other front-end areas, you can see a continued reliance on pre-v3 workarounds, where new features such as custom menus, post types and taxonomies would probably help. And I’m not sure I’d have left sign-up so open, but there you go.)
As some of you will be all too aware (!), I’ve been lobbying for precisely this kind of setup in the UK for more than three years – see this post from 2008 as an example. Perhaps three years ago might have been too early; but now, with multisite built into ‘normal’ WordPress v3.0, and with the drive to cut costs, surely it’s an idea whose time has come.
I’m still hearing rumours of greater centralisation for government web activity, probably within an expanded Cabinet Office operation: that would be the natural home for any such initiative. And as I’ve written here before, a well-structured, well-managed multisite install could offer a perfect blend of control and flexibility.
Of course I’d be keen to discuss it. 😉

I wrote last year about the insanity of the annual Budget speech(es), in which the Chancellor stands up and reads off a list of numbers. In business, you’d never contemplate doing that without some kind of visual aid. But come on, visual aids in Parliament?
Let me take you to Canberra, where there’s been an outbreak of visual aiding on the floor of the House of Representatives. In recent days, the ABC reports, Kevin Rudd and his government have been ‘taunting the Opposition by waving photos of projects funded with stimulus money’. The opposition have responded by wielding ‘a mock credit card to make its point about debt and a hard hat to mock Prime Minister Kevin Rudd’s appearances at infrastructure sites’.
But by common consent, things went a bit far on Thursday when, with the assistance of his front bench colleagues, shadow treasurer Joe Hockey unfolded a three metre-long chart, over six panels, illustrating the growth in government debt. The speaker ruled this was too much; Hockey responded by producing a pair of scissors, and cutting the chart into its constituent panels for individual presentation.
‘Pity they couldn’t have cut through the noise and silliness of a question time that added nothing to the sum of human knowledge,’ says Sky News Australia’s commentary on the ‘farce’.