A couple of potentially interesting launches today.
First came Start Up Britain, which offers an unusual proposition: ‘helping Britain’s future entrepreneurial talent by providing links to the web’s best business resources, along with offers from some of the biggest brands in the country’. You’re greeted at the top of the homepage, somewhat surprisingly, by a photo of David Cameron – looking quite sinister, or is it just me? (No, it’s not.) 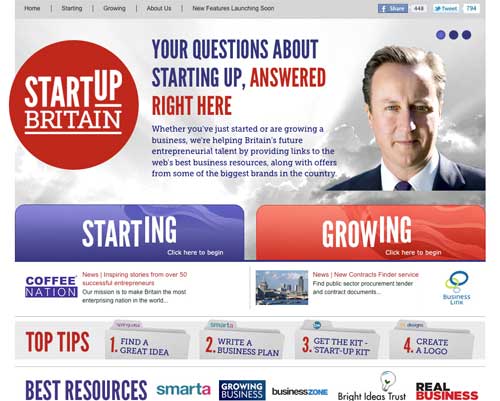 The site claims to have ‘the full backing of the Prime Minister, the Chancellor and HM Government’, and the big photo of Cameron – which may or may not be connected to the adjacent proposition? – lends credibility to a one-page site which might otherwise come across as yet another attempt to make money from startups: of its four ‘top tips’, two are explicit adverts, and one expects the other two will lead to some monetisation further down the line.
Dig beneath the javascript, and there’s little more to it – for now at least – than a bunch of links and money-off vouchers: so in effect, it’s an online equivalent of the goodie bag you’d get at the door of any one of the many startup exhibitions. Steph said it was hammering nails into BusinessLink’s coffin: that seems premature. But it certainly poses some challenging questions of it.
Then this afternoon, we see the launch of Innovation Launch Pad, a Cabinet Office initiative powered by Spigit – whose recently appointed ‘general manager’ is James Gardner, who joined them from DWP at the start of the year. 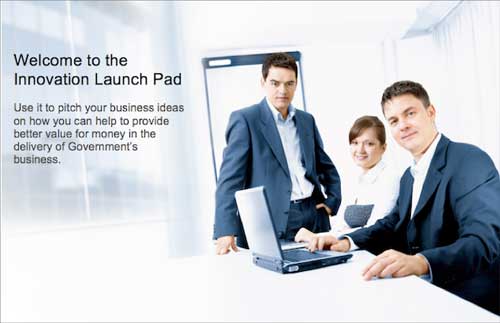 Until 22 April, the Cabinet Office is inviting SMEs to ‘pitch business ideas on how you can help to provide better value for money in the delivery of Government’s business… The best ideas will be handpicked by a community of civil servants and, after intensive mentoring from some of Britain’s foremost entrepreneurs, those that demonstrate the highest impact will be invited to present their ideas at a Product Surgery in the summer.  This will stimulate new, open competitions in Government markets in which these suppliers will be able to participate.’ None of which seems to guarantee any business, but anyway.
Coming on the same day, these two initiatives – both sitting somewhere between the public and private sector – certainly point to a different way of doing things, and (I suppose) make tangible Cameron’s notion of an enterprise-led recovery. Both are backed by names with good track records in this sort of thing, so certainly worth keeping an eye on. But do either of them fill me with inspiration? To be honest… no, not yet.


I’m not going to say much here about the Power Of Information Taskforce report: the best place to do that is on the site itself. But I will pick up one point which stopped me in my tracks. The report notes that:

Successful leading high tech businesses will spend at least 10% of their budget on innovation… DirectGov, BusinessLink and NHS Choices should create an combined innovation pot of 10% of their budgets, focussed on improving the public experience of government websites, through outside-in innovation not internal requirements. Annual plans on how this £10m innovation pool is to be deployed should be published and agreed by a new Head of Digital Engagement.

Now let’s be clear: £10m is a heck of a lot of money, particularly in a world where the price of the tools is almost negligible. By my rough calculation, that’s more or less equivalent to a team of 36 consultants on a day rate of £1000 ex VAT, working full time. Even allowing a big chunk for ‘overheads’, which you’d normally look to minimise anyway, you’re still talking about maybe 20 full time people earning absolutely top-whack salaries.
(Note: I’m not saying anyone’s worth £1000 a day; just noting that many in government would consider that ‘the going rate’. It explains why people keep telling me I should put Puffbox’s rates up.)
It’s too big a sum for the Big Ugly Consultancies to ignore, and that’s what worries me. If we’re serious about getting serious innovation, we need to treat this as a venture capital fund, and start getting the cash out to dozens of small-scale, agile, hungry operations.
The big boys are getting enough cash out of the public purse already – and will continue to take the lion’s share of the remaining 90%. If they want to innovate, they already have plenty of opportunity – and arguably, have had it for long enough.