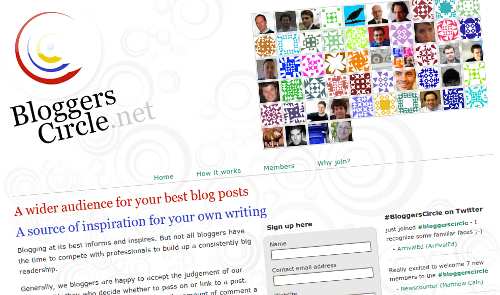 Some of the most fun projects come out of the blue. I’ve been following RSA chief executive Matthew Taylor’s blog for some time, and noted with interest his idea back in May to start some kind of ‘bloggers’ circle’. ‘There are too many bloggers and not enough readers so genuinely good posts can fall between the cracks,’ he wrote – correctly. So he suggested a ‘club’ whereby members would circulate their best posts, and would commit to writing about other members’ contributions.
Then I got an email from Taylor’s ‘old chum’ Matt Cain, asking if I could help them build a website for the project. Matt sent me a logo, a rough set of wireframes – and a very tight deadline. We managed to turn the website around within a couple of days, and it went live today at bloggerscircle.net.
It’s built on WordPress. OK, you didn’t need me to tell you that. But it’s got a couple of clever little touches, which probably won’t be immediately obvious.

Having just come out of the longest project in company history, it was a real delight to take this on, and turn it around so quickly. I’m quite pleased with the presentation, particularly the way the membership itself is the focus of the page; and it’s always fun to do things with WordPress technology that it wasn’t ever really meant to do. A few rough edges have appeared since launch – inevitable given the sheer lack of testing time, but nothing we can’t handle.
Taylor – whose blog really has become excellent reading – is frank about the project: ‘We are starting small and maybe we won’t succeed but it’s always worth having a dream.’ But he continues: ‘Imagine if there were hundreds or even thousands of amateur bloggers signed up.’ Well, er… if that happens, that design will have a few problems – but as they say, they’ll be nice problems to have.