Last week, we finally completed the longest-running and most ambitious WordPress-based project in Puffbox history. Back in February, with snow on the ground, we started developing the concept of a self-contained ‘social intranet’ platform to be used by staff across government – DFID, BERR (as was), FCO and elsewhere – involved in the many facets of trade work. And with temperatures soaring at the end of June, we finally saw the site get off the ground.
Maybe I’ve just been unlucky in my career, but I’ve never seen an intranet I didn’t dislike. So the opportunity to design one, based on the experience of the 2.0 Years, was quite appealing. Inspired in particular by the work of Jenny Brown and Lloyd Davis at Justice, we based our thinking on the notion of an RSS dashboard. Since the biggest problem with most intranets is that they aren’t reliably updated, we thought, why not build an intranet that updates itself? So at its heart, the site is a huge RSS archive – pulling in news releases and media commentary from UK government, international organisations, expert analysts and humble bloggers. And since it’s all sitting on top of a WordPress MU installation, it’s easy for us to make each item commentable – on the platform itself, rather than at the originating site. 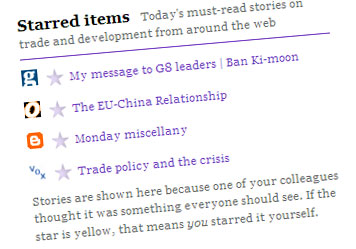 Of course, there’s a risk of information overload. So we’ve built a ‘collaborative editing’ function – along the lines of Google Reader’s shared items, but done as a group thing. If you read something which you think your colleagues ought to see too, you click the star icon, and it gets promoted to a ‘daily highlights’ list on the site homepage. Then, at the end of each day, there’s a Daily Email which rounds up all the ‘starred items’ – so even if you never look at the website, and we’re realistic enough to accept that some won’t, then you can still get the benefit from it.
We’ve used various WordPress plugins to add calendar functionality; to allow users to upload (non-restricted) documents; to put their faces against their contributions, making the place feel a bit more human; and even to allow senior staff to blog on the site via email. You could probably accuse us of throwing the entire 2.0 playbook at the project, and you’d be absolutely right. But apart from the core aggregation and recommendation functionality, everything else uses off-the-shelf open-source plugins, installed and configured (generally) within a few hours. So if they don’t work out, what have you lost?
This project has taken up most of my time for the past four months; working with my regular co-conspirators Simon Wheatley and Jonathan Harris, we’ve pushed the boundaries of the technology, and tested the limits of the civil service mindset. Although many of the individual elements have been tried before in government, I believe it’s the first time anyone’s tried to do all of it, all together – and crucially, all on an in-house system, which opens up some very interesting possibilities. (And yes, as ever, you might be pleasantly surprised by the price tag, too.)
So is this finally an intranet I like? I’ll offer a provisional yes for now, but maybe it’s better to ask me again in a few months. Since it’s a closed system, there’s limited scope for me to demo it… but if it’s something you might be interested in, ask me very nicely, and I’ll see what I can do.