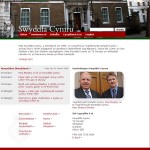 A timely piece from the BBC’s Ashley Highfield on the ‘digital divide’. It’s timely, because as of this week, Britain has a Cabinet-level minister with responsibility for digital inclusion – Wales secretary Paul Murphy. This news appeared to come as a surprise to BBC Wales’s David Cornock when it emerged at PMQs this lunchtime. Mr Brown announced:

All of which is very timely, for reasons I’ll reveal here tomorrow. (Although if you attended my session at Barcamp, you know already.)

Well, that’s a relief. With Peter Hain resigning at lunchtime, there was a rush of quite rational speculation that the Wales Office might be folded into a new ‘department for the devolved bits’, covering Wales, Scotland and Northern Ireland.
I’ve been doing a bit of work for the Wales Office over the last month or so, which I’ll (hopefully?) be unveiling at Saturday’s government BarCamp. I’m exceptionally proud of it, and I think it’s a potentially groundbreaking piece of work for e-government. But if Downing Street had announced the end of the Wales Office as a department in its own right, the whole point of my project would have disappeared. And for a moment this afternoon, it looked like my masterpiece might never see the light of day.
Paul Murphy, I can’t tell you how pleased I am to hear of your appointment. I note he’ll also be chairing a ‘new cross-departmental committee on IT and information security – although the grammar of the No10 announcement doesn’t make clear if it means IT generally, or IT security specifically.