Today sees the long-awaited launch of the new Number10 website, based on WordPress and built by New Media Maze with occasional interventions by yours truly. The reaction so far has been positive, although as the team have admitted to Twitter contacts, there are numerous rough edges still to be smoothed out. (Some more serious than others: as I write this, the site’s gone down.)
Although I’ve been contributing to this project for several months, today’s public activation is the first time I’ve actually seen it ‘for real’ – and I’m struck by just how stripped-back it really is. The homepage really does feel like a blog; and it’s a pleasant surprise to see quite how much prominence has been given to the Twitter, Flickr and YouTube activity. The image / video unit at the top of the homepage really is huge, and represents a brave move: keeping it fresh will be quite a challenge, but good on them for trying nonetheless.
The exciting aspect for me is the sheer potential opened up by the move to WordPress. There has been a lot of hard (and frankly unglamorous) work done by the guys from New Media Maze to migrate everything to the new platform. But now that’s done, we can all start thinking about extra functionality and presentation ideas, and add them into the site with relative ease.
The ‘beta’ label in the header isn’t just an industry in-joke, or an attempt to excuse any temporary difficulties: it’s a statement of future intent.
PS: If anyone’s interested in the background to today’s launch, you can look back through the Puffbox.com archives. And please note the URL of that link, for another cool WordPress trick. 🙂 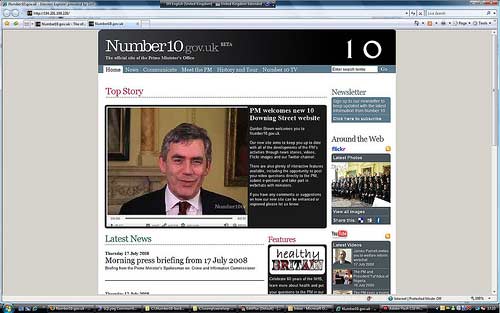 Fresh from stealing the online show at the recent G8 summit, the 10 Downing Street digital comms team have given the Prime Minister’s new website its first public outing, with a few sneaky screengrabs popping up on their Flickr account. It’s quite a significant departure from the existing site, although if you’ve been following the travel-blog work I’ve been doing with them recently, you’ll instantly recognise its evolution.
The most striking element is the prominent use of video, with a large playback window – not YouTube, FYI – occupying pride of place on the homepage. (It’ll be hard to avoid comparisons with Obama’s website in that respect – but with initiatives like TelegraphTV, we’re all heading towards the same thing.) The team’s activity on third-party sites, like Flickr and Twitter, is also brought to the fore – driven by RSS feeds from the originating sites, as I’ve done on the travel-blogs.
You’ll note a much more streamlined navigation on the new designs – primarily because the new site has been stripped right back to its core functions, allowing the team to concentrate on the day-to-day work. The historic information remains popular, and keeps its place; but otherwise, it’s a sharp focus on news and communication.
If it feels a bit bloggy, there are a couple of good reasons for that. In part, it’s a recognition of the role now played by blogs in national political life. The political anoraks who are likely to visit a Downing Street site are probably spending the rest of their time on the political blogs, so it makes sense to adopt the same presentation methods. And yes, as you’ve probably guessed, the underlying technology is WordPress.
The new site has been designed and produced by New Media Maze, with occasional contributions from Puffbox. And of course, being WordPress-based, there’s plenty of scope to take the site forward in the coming months. We’re already floating ideas for new features.
The team haven’t quoted a ‘go live’ date, but my understanding is that it’s in its very final stages of development, and they aren’t afraid of a ‘public beta’ approach. Watch that space.