I’ve only just come across the Department for Culture, Media and Sport‘s blogging server, running on Movable Type. Departmental CIO Mark O’Neill certainly kept that one quiet, when he came along to Word Up Whitehall last week. 😉
Started back in June, it consists primarily of posts by junior ministers John Penrose and Hugh Robertson – but features occasional posts by secretary of state Jeremy Hunt (who continues to blog on his constituency site), and a somewhat random collection of guest bloggers including celebrities, sports stars and officials: but these only seem to be one-off contributions.
It looks nice, and they’re making an effort with photos. But there’s no commenting, no subject tagging, no author archiving, just a single global RSS feed, and only the highest-level categorisation of posts. As a result, there’s no real sense of structure, and nothing making me want to engage with either the authors or the content.

I’d like to wish a happy first birthday to Margaret Hodge’s DCMS Diary. I thought I knew of every Ministerial blog out there, but a client mentioned this one to me earlier this week, and I was amazed to see it had been going so long. (Hodge only arrived at DCMS at the end of June ’07, as part of Brown’s inaugural reshuffle, so she didn’t hang around either.)
Google Reader only knows of 6 subscribers; and in my experience, Google accounts for 50% of the typical blog’s RSS subscriptions, taking us to a mammoth dozen. After a year? – now that’s what I call a soft launch. It’s basically a record of her glamorous adventures as culture minister, rather than a forum for detailed political discussion; and posts are somewhat sporadic… currently running at one every two months.
It’s running on Movable Type v3, with the IP address coming out as a Windows/IIS box at Digex UK (aka Verizon, I think). DCMS’s main site sits at Rackspace, which makes me think it’s another of the ‘sandbox’ servers which seem to be popping up (and rightly so) all round Whitehall. Comments have been disabled across the entire site, which is a shame, particularly in the light of the Digital Dialogues conclusion that moderation is never as onerous as you expect.
Somebody really ought to compile a list of Ministers’ blogs… but maybe it’s best to wait a few weeks, for what are probably obvious reasons.

There’s a new look to the BBC News website. They’ve been working on it ‘for the past few months’. So there’s clearly more to it than just making everything a little bigger – font sizes, white spaces, etc. Isn’t there? 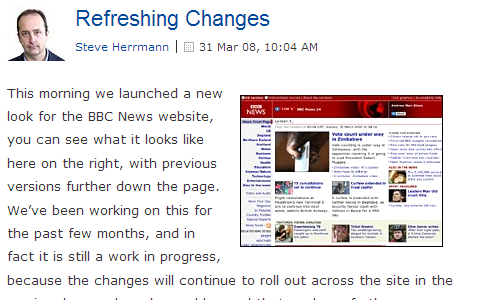 The trouble is… the screenshot currently showing on the BBC Internet Blog homepage shows the old site, not the new one. If Steve Herrmann (or his people) can’t tell the difference, what chance do the rest of us have? (It’s correct elsewhere on the site – eg the extended page – which makes me think it’s a Movable Type problem, but that’s no excuse.)

‘The man who persuades important people in BBC Future Media and Technology to write blog posts’ is more accurate but a bit of a mouthful. But as well as persuading people to write, Alan Connor and I do the actual work of putting what they write into the blogging software, checking it, sometimes adding extra links and photos, and then pushing the button to publish.

The post (currently) features a fairly small number of comments – ‘typical BBC’… ‘waste of resources’… ‘public money’… etc etc. Sadly though, I note the comment I tried to submit – but apparently failed – hasn’t come through.
What shocked me most wasn’t the fact that the blog has a full-time staffer, although that’s certainly curious. It was more the suggestion that people in the BBC’s Future Media & Technology department aren’t capable of typing or pasting words into a web-based authoring form. This includes people in extremely senior and highly paid positions – Ashley Highfield reportedly earns £359,000 a year (including benefits). I’d like to think he’s capable of basic computing skills. I’m afraid a promise that he’ll try to stop emailing in his posts just doesn’t cut it. Movable Type v3.2 isn’t state-of-the-art any more, but it’s hardly rocket science.
My attempt at commenting fell foul – not for the first time, it must be said – of the BBC’s creaking blogging platform. I know they know it isn’t up to the job. Why the delay in replacing it?