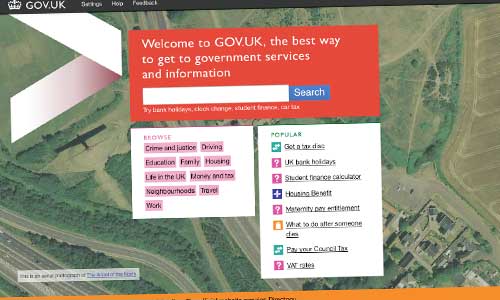 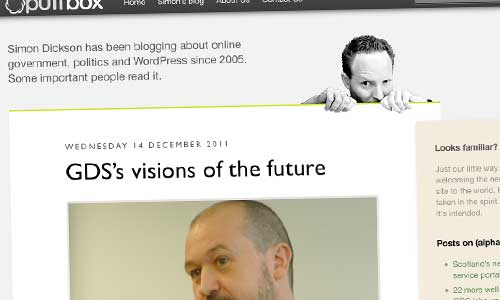 Computer Weekly have posted an interview with Mike Bracken: a fairly chatty (and somewhat predictable) getting-to-know-you piece, but with a few interesting snippets.
He reflects on the problems with the e-petitions relaunch:

For example, with e-petitions, no-one could predict just how fast that demand would go up. Consequently we learnt a lot about scaling and applications within the government estate. We reacted literally within an hour to sort out [the site crashing]. If someone else is doing that for you, you don’t learn. Managing a contract is a distinct skill but actually managing the service is different.

Was it really so unpredictable? Ah well, never mind. There’s also some detail about the structure of the nascent Government Digital Service:

The five areas of GDS will include DirectGov, which will be the most prominent constituent; identity assurance, which will identify people consuming government services; BetaGov, headed up by Tom Loosemore and formerly known as the AlphaGov team building a prototype for a single government website; digital engagement; and the innovation team.

Total headcount within the GDS will be ‘up to 200’, but the budget across those five areas has ‘yet to be finalised’. (Incidentally: it was confirmed in a PQ issued today that the GDS budget for 2011-12 would be £22.3 million.)
Mike also makes a point about the need to set precedents, a point I’ve made here numerous times in the past:

Launching successful products and pointing at them as examples of what can be done will be key. One can do lots of formal learning, but the simple way to build that culture of expertise is take people on a journey with you, which also means failing and learning on the way.

I’ve learned from my own experience that this is really the only way to take organisations with you. Find a modestly-sized but reasonably high-profile project, whose manager buys into the need for change. Make a success of that one, whatever it takes; then sell everything else you’re planning on the back of it.
The argument of ‘well, it was good enough for X’ is pretty primitive; but it works better than anything else I’ve ever tried. I’ve found few teams who really cared about ‘the journey’: most are only really interested in knowing the (approximate) destination, and seeing some evidence that you know the route.

It’s now been confirmed that the new (£142k pa) Executive Director Digital, filling the post currently held by Chris Chant on an interim basis, and advertised back in April, is to be Mike Bracken – digital director at The Guardian until last week.
Computer Weekly makes some interesting – and quite exciting – observations about the management culture he built up:

While GNM has outsourced some IT roles, the company has brought in information architects, analytics and product development managers as a discipline. GNM uses an agile environment for developing web applications and has scrapped project management and business analyst roles to replace them with product managers.

In fact, he sent a tweet to Steph Gray yesterday which seemed to suggest he sees a similar role for ‘product managers’ in government:
[blackbirdpie url=”https://twitter.com/#!/MTBracken/status/71234171762262016″]
To get a flavour of what to expect, fasten your seatbelt and watch this five-minute breakneck presentation on innovation, which he gave to a WPP event last year:

… or this slightly more corporate presentation on deriving benefits from social media, at a Gartner symposium in October. (Fast forward eight minutes to skip the extended intro.) You’ll like what you hear.
Interestingly, in both presentations, he uses the same quote from Simon Willison. How exciting is it to have a new digital director who actually appreciates that:

You can now build working software in less time than it takes to have the meeting to describe it.

Those who know Mike are very complimentary about him: I note William Heath’s description of him last week as ‘one of the UK’s very best new-style CIOs’. On the downside, though, he’s a Liverpool supporter.
Mike’s personal website is at mikebracken.com – and he’s done a post formally announcing the appointment. He runs a couple of Twitter accounts: you’ll probably want to follow his ‘work’ account, @MTBracken.
He starts on 5 July.