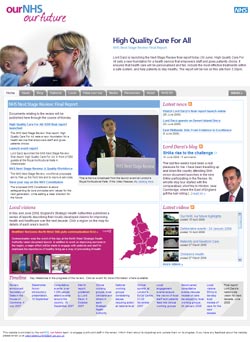 This afternoon sees the effective conclusion of Lord Darzi’s year-long (ish) review of the National Health Service, under the Our NHS Our Future banner. I did a quick reskin of the associated website back in May, and we’ve gone a few steps further to mark the big finale.
Inspired by comments from Tom Steinberg back in January, regarding the HMRC website on tax deadline day, I decided to rework the homepage to raise all the Review documentation right to the very top. A big friendly header immediately grabs your attention, and says yes, you’re in the right place. There’s a live video feed from the launch conference, embedded directly in the homepage using Flash. We’re hoping to keep the as-live video available ‘on demand’ for a few days, whilst we cut an edited highlights package. Previous homepage content isn’t lost, but gets bumped well down the page.
The live video feed came together remarkably quickly – the idea was first floated on Thursday afternoon, and here I am on Monday, watching it on my desktop. See? It can be done.

Today sees the launch of version 2 of the website I designed and built for Lord Darzi’s national review of the NHS. V1 was built in double-quick time during the summer, and for reasons of cost and speed, used the Typepad blogging platform. Over the last month or so, Typepad’s limitations have become more and more apparent… so it was time to migrate to WordPress. Which, of course, is what I’d always wanted.
All the juicy new stuff hangs off the homepage. ‘Latest news’ is (as you’d expect) a listing of the top news updates, using a special ‘homepage’ category to give the authors total control. ‘Lord Darzi’s blog’ is the latest blog to be written by a government minister, but unlike some, we’re positively encouraging comments. Finally, there’s the ‘latest video’: the review team is producing quite a lot of video content, so we’re sticking it on YouTube, and using YouTube’s little-known RSS feed functionality (with a bit of string manipulation) to pump it back into the site.
The primary navigation is a mix of blog categories and static ‘pages’: hey, if you dig deep enough, there’s even an old-school image map! How long is it since I did one of those? We haven’t made any distinction between the two; I’m not sure it really matters to the punters.
As it’s WordPress, we’ve got full comment functionality if we want it. The plan is that blog posts should generally have comments enabled, but news posts won’t. However, if we fancy it, we can. To draw attention to the items where comments are ‘on’, there’s a little speech bubble icon which appears against the relevant headlines. A minor thing, but it catches the eye really well.
Overall, it’s taken less than a week to recode the templates, develop the new functionality, and import the content. Importing from Typepad was relatively painless: the initial process took seconds, but then you’ve got the hassle of setting summaries for each item, identifying and repointing all the manual inline links, etc etc. I’m glad there wasn’t too much content to worry about. DNS changes and server reconfiguration took about a day and a half, which was a real disappointment, but at least it’s done now.
I’m really pleased with it; the initial site was OK, particularly given the laughably short timeframe, but I knew we could do better. I’m afraid the exercise has put me off using Typepad, though: although it does have some pseudo-CMS functionality, my feeling was that it’s too tied to the concept of blogging.
Next steps? We’re thinking of a photo gallery, and maybe even some delegated authoring responsibility. But that’s all for another day. My next WordPress-in-government project is looming, and is likely to be even bigger. 😉