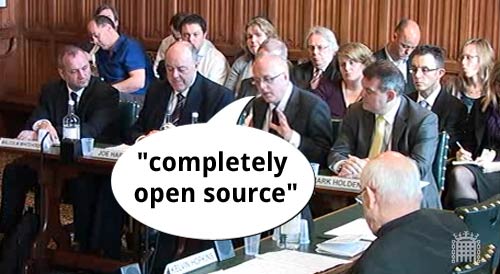 The subject of open source came up at this morning’s Public Administration Select Committee hearing with (among others) new government CIO Joe Harley. You can watch it at the ParliamentLive.tv website, if you’re so inclined. I had it on in the background, and my ears pricked up when I heard HMRC CIO Phil Pavitt make a bold and somewhat unexpected claim:

Open source has been around for some time now, and in HMRC we’ve been very fortunate to develop a quite extensive open source-based set of solutions for us. We’ve actually transformed our website, which as you know is one of the largest websites in the UK if not in Europe, to actually become a completely open source technology. […] This is the website obviously which self-assessment and so on runs through. […] So not only is it out there on a very large scale in terms of open source, it is very heavily used.
(12:02pm)

Now, leaving aside the unqualified claim to be one of the continent’s biggest websites… ‘completely open source’? That’s pretty categoric.
So it’s a little odd that if you look at the HTTP headers, using a web-based tool such as Web Sniffer, you’ll see that www.hmrc.gov.uk is actually running Microsoft’s IIS 5.0. Netcraft.com seems to confirm that it’s running IIS on Windows 2000.
And if you look at the source code for, say, Phil Pavitt’s biography on the site, you’ll immediately see it littered with ‘InstanceBeginEditable’ tags: the tell-tale sign of (Adobe) Dreamweaver code… not to mention explicit references to .dwt templates.
The Online Services section, online.hmrc.gov.uk, uses F5 Networks‘s BigIP – I’m afraid I don’t know anything about it. But the only information I could find about its engagement with open source was a blog post by a staff member, who wrote (admittedly a year ago):

I’m not new here, just new to blogging at F5 Networks. I’ve actually worked at F5 for almost three years now. […] One of the first things I started checking into upon my arrival was how involved we were with the Open Source community. Sorry to say, it wasn’t much. We use parts of Open Source software in our platforms; we have customers that use our platforms in conjunction with their own Open Source deployments; we even have our own successful community in DevCentral, where we encourage users to share in the forums, publish their solutions and iRules, and generally give back to the community. As for the larger Open Source community, it didn’t seem we had a role.

Curious, eh?
Update, October 2011: After further research, inspired by a sudden spike in traffic from (what looks like) HMRC’s intranet, I found something of a clarification from Mr Pavitt, in an interview given to Computer Weekly in July.

HMRC is the foremost government department on open standards, we give away our APIs to over 1,600 software vendors for example. On open source it’s more complicated. For self-assessment online, of the bits that face the customer, the high-volume stuff, SMEs provide that for us, and 70%-80% of it is open source. But for a heavy-duty tax like PAYE – crunching 35 million people’s tax details – people may be more worried if that’s open source. We have to wrestle with what is appropriate. Certain things will never ever be open sourced. Our job is to make sure as much as possible that can be, is. 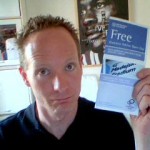 I’ve just received an invite to attend a Free Business Advice Open Day, hosted by HMRC with the support and active participation of Business Link. Their glossy leaflet includes a URL on the front cover: www.businessadviceday.gov.uk. You can probably guess where I’m going with this.
In November 2005, the Transformational Government strategy declared:

For customer information, self-service transactions and campaign support, services will converge on Directgov and Business Link as the primary on-line entry points; service-specific or stand-alone solutions will be phased out.

Er, so what is this site exactly? A stand-alone site with self-service transaction. And to make matters worse, there’s no reference anywhere in the leaflet to the main Business Link URL. (Interestingly, several of the other partner organisations include their URLs in their logos, making them actually better represented than Business Link!)
A whois search reveals that the businessadviceday domain was actually registered more than a year after the Transformational strategy was published. There’s really little hope for rationalisation when customer-facing activity like this, on behalf of one of the primary beneficiaries of rationalisation, is being handled through stand-alone websites.
PS: Today was actually the first time I’ve come across a whois which works for gov.uk – hosted by Janet. Well worth bookmarking, although its accuracy is limited. Most of the records for well-established domain names are listed as being ‘created’ in 2003, which clearly isn’t right. But basic contact details are generally included, and should provide a starting point at least. 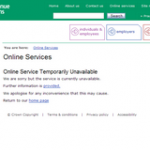 Prepare yourself for the next ‘IT incompetence’ story: HMRC’s online self-assessment website has gone down, on the day people must file their tax returns, or face a fine. Based on last year’s numbers, it’s going to affect thousands of people. The BBC’s story has a bit more.