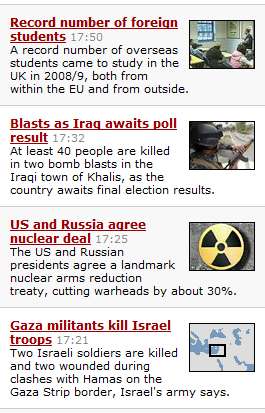 Directgov has announced a ‘partnership’ with Microsoft, promising to make it ‘easier than ever to find government information and services online’. In practice, this means they’re using the new ‘accelerator’ feature in Internet Explorer v8: you can select some text on any web page, then right-click to access a ‘search Directgov’ link which fires that word directly into the Directgov search engine as a search query. I don’t think it’ll be life-changing for anyone, and my suspicion is that there’s more in it for Microsoft than Directgov – but hey, it’s not a bad thing. 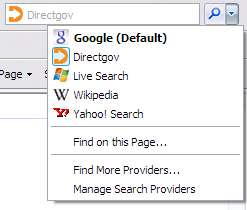 But how many people are using IE8? What about the much greater number of people using, say, IE7… or Firefox? Puffbox to the rescue! I’ve thrown together a quick search plugin for Directgov, which will allow you to search Directgov directly from the browser interface.
And if you’re using Firefox, and you happen to have Directgov selected as your browser-bar search engine at the time – behold! you’ll have the same ‘search Directgov’ option in your right-click menu! (Thx to Stuart in the comments.)
Visit this page on the MozDev website to find Puffbox’s brand new Directgov search plugin. Click on the word Directgov, and it’ll ask you if you want to install – say yes. If you then consult the list of search engines available from your browser’s built-in search box, you should now see a Directgov option. Enter a word, and it’ll take you straight to a search query for that word.
Puffbox principal consultant Simon Dickson said: ‘Directgov is taking advantage of long-established capabilities within Internet Explorer 7, and better alternatives such as Firefox, to make it easier for members of the public to find information on the Directgov website – whether they realise it or not. Directgov is among the forward-thinking organisations using modern technologies to benefit their target audience, and we are delighted to be helping them.’
I’ll link to the Directgov newsroom article as soon as it’s been posted.

I haven’t played with Google Docs for a while, but news of a form designer to ease spreadsheet input intrigued me. A lot of spreadsheets, especially in an office environment, are actually pseudo-databases. So why not treat spreadsheet data entry like a database?
It’s a great idea, but the initial execution is a bit disappointing. The form designer is pretty limited: some nice Ajax-y touches, but a restricted number of field types, and no easy way to enter dates (pre-population? popup calendar?). I have a couple of work-related spreadsheets which I update on a rolling basis, and which I’d happily move over to this kind of form-based approach… but sorry, not yet. Wufoo still seems to be the leader in online forms… and with the addition of payment processing, it opens up all sorts of possibilities.
But the whole Google Docs experience is definitely improving. I tried using the Prism browser, which is basically Firefox stripped bare: and it made for a more natural ‘Office-y’ experience. It was actually surprising how much the lack of familiar browser screen furniture helped. But I think it really needs to be offline-enabled (via Google Gears or Firefox v3?) to make its breakthrough. That may not be far away, as it happens: offline Google Docs access has been spotted in testing.