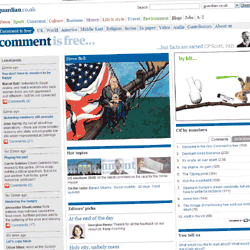 A big day for the Guardian today, as the new community-enabled Comment Is Free makes its debut. Site editor Georgina Henry describes the various mechanical and presentational changes, but one in particular catches my eye.
Each user of the site now has a personal profile page… featuring an ‘instant archive’ of all the comments they’ve added to Cif articles. It’s the realisation of the ‘blog of comments’ concept I described a year ago, prior to the launch of the Telegraph’s own blogging platform:

Every time I add a comment to a Telegraph news story (for example), it would get aggregated on a ‘personal profile’ page… in other words, a de facto ‘news blog’. You automatically see the headline (and first paragraph?) of the story I commented on, followed by what I thought. It lets me write what is effectively a news-driven blog, but does a lot of the copy-and-paste work for me.

The presentation of these profile pages is pretty dreadful. It’s little more than a few lines of metadata, followed by something resembling search results. No customisation options, no uploaded ‘buddy icons’, no RSS feed per user*, no in-profile navigation (other than pagination), no sort options.
So there’s a very long way to go before these profiles become recognised as ‘blogs’. But make no mistake, that’s what they are. It’s blogging without the overhead, and it ties the blogger ever closer to the Guardian brand and site (whose primary navigation Cif now shares).
* In fact, the new Cif’s lack of RSS overall is a real shame. Cif’s biggest problem is that there’s just too much of it. A single RSS feed, covering all topics, isn’t much help. I really hope these are a feature of the topic-based ‘subsites’ Georgina refers to. They’re getting RSS and subject filtering so right elsewhere on the Guardian site… but Cif needs it more than any other section.

It didn’t generate much media coverage, but there were some stirring words in Gordon Brown’s speech on Saturday to the Church of Scotland general assembly. One of the recurring criticisms levelled against him has been a lack of a defining vision: well, try this one for size.

The greatest arsenal of power today is not nuclear or biological or chemical but people – the discovery of our capacity to come together across borders and oceans and to stand together as one. And what I want to argue is that the joining of these two forces – the information revolution and the human urge to co-operate for justice – makes possible for the first time in history something we have only dreamt about: the creation of a truly global society.
A global society where people anywhere and everywhere can discover their shared values, communicate with each other and do not need to meet or live next door to each other to join together with people in other countries in a single moral universe to bring about change. I believe that these vast and swiftly summoned movements of people coming together can now become the most powerful weapon for justice ever put in human hands.

It’s great to see a politician, the Prime Minister indeed, going a step beyond the ‘information revolution’ phase, and talking about the impact on society and human relationships both nearest and distant. Steadily we’re seeing The Establishment start to recognise how far the transformation goes. But one wonders if the PM will feel it even more directly after the Crewe by-election on Thursday night: the Tory bloggers, like the party they support, are pushing as hard as they possibly can.
Interestingly, what little media coverage there was – particularly in the Scottish papers – has been overwhelmingly positive for the PM; in stark contrast to virtually everything else from the nationals lately. ‘If Gordon Brown was Prime Minister of a better Britain, then his speech yesterday would have confirmed this son of the manse as the man Britain believes is right to run the country,’ writes Scotland on Sunday’s Kenny Farquharson. The Sunday Mail was even more direct: ‘On his home turf he showed that he is still the man to lead Britain.’ It’s not all bad out there.