Another example of why I love WordPress. Somebody has built a new theme which, with the help of a few common plugins, becomes a contact manager – with search, tagging, ‘related people’, etc. But I think it can be pushed further.
Using the standard WordPress comment functionality, I don’t see any reason why you couldn’t turn this into quite a sophisticated CRM tool, along the lines of 37signals’ Highrise. You’d automatically get an RSS feed per ‘client’, and a global RSS feed for ‘all client activity’. Plus, it would all happen on the client page – no need to go ‘back end’. Ooh, I’m buzzing with ideas on this one already.

I haven’t played with Google Docs for a while, but news of a form designer to ease spreadsheet input intrigued me. A lot of spreadsheets, especially in an office environment, are actually pseudo-databases. So why not treat spreadsheet data entry like a database?
It’s a great idea, but the initial execution is a bit disappointing. The form designer is pretty limited: some nice Ajax-y touches, but a restricted number of field types, and no easy way to enter dates (pre-population? popup calendar?). I have a couple of work-related spreadsheets which I update on a rolling basis, and which I’d happily move over to this kind of form-based approach… but sorry, not yet. Wufoo still seems to be the leader in online forms… and with the addition of payment processing, it opens up all sorts of possibilities.
But the whole Google Docs experience is definitely improving. I tried using the Prism browser, which is basically Firefox stripped bare: and it made for a more natural ‘Office-y’ experience. It was actually surprising how much the lack of familiar browser screen furniture helped. But I think it really needs to be offline-enabled (via Google Gears or Firefox v3?) to make its breakthrough. That may not be far away, as it happens: offline Google Docs access has been spotted in testing.

Alfred Hermida, ex BBC, now Assistant Professor at the University of British Columbia’s school of journalism, makes an interesting suggestion: using the new WordPress Twitter-style ‘Prologue’ theme as a breaking news site, ‘with reporters adding the latest details as they come in’.
I actually suggested something identical to this, back in July: ‘A ‘breaking news blog’, in my book, should look and feel more like Twitter. Activate it when a huge story breaks – maybe only a couple of times a year, maybe a couple of times a month. Short snaps of maybe only a couple of lines, written in an informal tone.’ Wish I’d followed it through, now.
If I were running a news operation right now, I’d have a WordPress installation quietly stashed somewhere offsite, ready to go. It’s so many advantages: emergency capacity in the event of a site meltdown, instant activation (by the newsroom, not the IT team) when required, and a more natural ‘breaking news’ style. When you get another 9/11, it could be as simple as switching the DNS for your main site.
By the way… did I really hear a BBC interviewer utter the words ‘people look at the World Trade Center very differently after 9/11’ the other day? Yes: they used to look up, now they don’t. That’s pretty different.

At the heart of my dislike for Windows Vista has been a recurring problem with wifi. The spread of free wifi, notably thanks to McDonalds has been a godsend to someone like me, living well outside London (ooh, nice double entendre there) but spending a lot of time in it. But too many times, I’ve connected to a wifi network only for Vista to tell me: local access only.
I’ve finally found a cure, but typical Microsoft, it’s hard to find and even harder to understand. All it involves is a bit of registry tweaking: follow these (fairly simple) instructions on their support site. It worked, and I’m relieved. (For what it’s worth: I opted to disable the ‘DhcpConnForceBroadcastFlag’ completely, on all the GUIDs listed in the registry. It worked for me, but it may be better for others to follow the ‘DhcpConnEnableBcastFlagToggle’ route.)
But this issue causes me real concern as regards Vista. The Microsoft wording infers that it’s a feature, not a fault. That it’s deliberate on their part. That it’s the wifi providers’ fault for not supporting its new feature… not that it’s Vista’s fault for not being automatically compatible with (in my experience) most public wifi networks. And I just don’t think it’s fair or realistic to expect the typical laptop buyer to start hacking the registry, especially when Vista goes to such great lengths to scare you away.

As if I needed another reason to love WordPress, along comes their new Prologue theme which effectively gives you your own local version of Twitter. That’s not to say it’s a competitor to Twitter: the whole beauty of Twitter is that everyone is using the same platform (with occasionally unfortunate consequences). But as a team collaboration tool, particularly on anything requiring a bit more privacy, this is potentially brilliant.
And yet, it’s so obvious. The ‘tweets’ are just very short blog posts. Author archiving, tagging, commenting, permalinking and RSS functionality is all built-in anyway. All it needed was the integration of a ‘write new post’ box into the display template – plus the stroke of genius to actually do it. Now all we need is an events calendar (maybe using the same ‘input box on the output screen’ concept), and WordPress takes over the world.
(If you want to use it on a local installation, you can get the files from Subversion. And you know what? Looking at the underlying PHP code, it’s depressingly straightforward. 🙂 )

I’m not a huge fan of email generally; it usually means ‘work’, as Mr Briggs noted following Barcamp, and I’ve argued about previously. In my mind, spam has discredited email as a marketing mechanism. But a lot of large corporate clients still think in email terms, and it isn’t going away any time soon.
So it’s with some relief that I note, among the list of improvements planned for the Blackberry platform in 2008, is:

If you’ve never used or worked with Blackberry, you’ll be shocked at just how badly it handles HTML email (as I described in an article for BT last year). So on the face of it, this sounds like good news, and will be widely welcomed – although naturally we’ll have to see how it pans out.

I’m finding more and more reasons to like Adobe’s new AIR technology. They describe it as ‘a new technology that makes possible exciting new software applications that merge the desktop and the web’; in practice, it opens software development up to those who chose to specialise in more ‘creative’ fields like Flash. And of course, because it’s AIR, the same app runs on both Windows and Mac (with Linux support  to follow).
Two current favourite tools: Analytics Reporting Suite, for looking at your Google Analytics data; and Twhirl, a lovely little Twitter app. In both cases, the originating website was already perfectly usable, but the convenience of a desktop app takes it a step further.
The Analytics tool is a reminder of the web’s limitations, even in the post-Ajax world: it’s just quicker, neater, and arguably prettier. And there are countless reasons to like Twhirl: you can log into several accounts at once; the interface removes the need to remember all those ugly Twitter codes; and there are ‘toaster’ alerts when a friend sends an update. Both are highly recommended… and free, obviously. 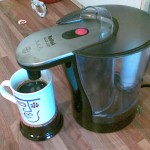 I am in awe of the latest gadget to appear in our house: the new Tefal QuickCup ‘kettle’. I don’t pretend to understand how it works; something to do with spirals. All I care about is: you fill it with cold water, you press the red button on top, and within three seconds it starts spitting out hot water at a coffee-friendly 85°C. There’s a built-in water filter, too.
Even better, it can apparently ‘save up to 65% energy’ compared to a normal kettle… so it’s environmentally sound too! Granted, it’s a bit noisy, and it sprays a bit if you don’t put the mug relatively close up to the spout – but worst case scenario, it’s noisy and spitty for three seconds. I think I can put up with that.
This totally redefines the process of making a cup of instant coffee, and my world is hereby changed for ever. Unfortunately, the inevitable result will be a dramatic increase in my caffeine intake. Amazon has them for less than £50. Coffee on demand, with a green conscience? For fifty quid? Come on, people. It don’t get much better.