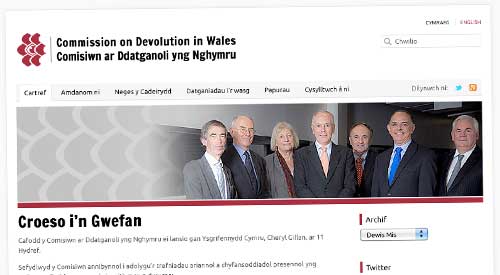 It feels like ages since I built a site completely from scratch; so much recently has been about invisible enhancement, or extra-large scale work taking months to reach its conclusion. So it’s been great fun to do a small and relatively quick build for the Commission on Devolution in Wales, established to review the present financial and constitutional arrangements in Wales.
In fact, it’s been a complete identity package: working with Matt Budd, we generated a handful of logo suggestions, trying our best – but ultimately failing – to get away from the use of a red dragon. The Commission team picked a favourite which we then worked up into a website, Word and PowerPoint templates, business cards, etc etc. (Note the deliberate selection of a (free) Google Web Font, by the way: how’s that for ‘digital by default’?)
The website is a child site of the Wales Office‘s existing WordPress multisite setup, which we activated just over a year ago, with precisely this kind of scenario in mind. A couple of clicks, a mapped domain, and bingo – a new and independent website in a matter of moments.
Ah yes, independent. We’re using the independent.gov.uk domain, set up to accommodate ‘arms-length bodies, independent inquiries and other suitable temporary sites’. I still feel slightly uncomfortable with caveat-ed gov.uk addresses like this: is it gov.uk, or isn’t it? But it’s an established standard now, so we’ll happily fall into line.
All of which gives us a site rejoicing in the URL:

unless you’re Welsh, in which case you get:

– which, if I’m not mistaken, is the joint longest root URL in UK government, matching that of the Commissioner for Public Appointments who – guess what? – is also independent of government.
It’s a single child site, running off a fairly simple but internationalised theme. The content is fully bilingual, managed – somewhat reluctantly, I must say – via the paid-for WPML plugin. As Word Up Whitehall attendees will have heard, Mr Wheatley and I are working on a multilingual plugin of our own: but it’s not quite ready yet, and anyway, the Wales Office server wouldn’t be ready for it either. (Long story.) I bear the scars of several WPML-based developments recently, but this one doesn’t push it too hard, so it’s been OK.
My thanks, as ever, to Matt for the creative work, Simon for some last-minute cake icing, and the Commission team for making this one run remarkably smoothly.
We’ll have more multilingual shenanigans to come in the next couple of months… but on a completely different scale. 😉