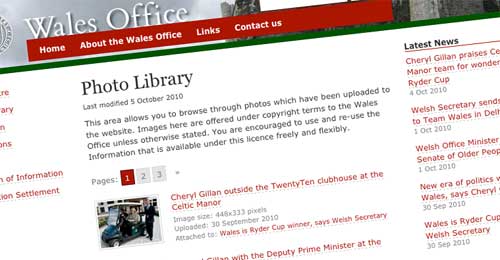 The Wales Office was where the whole WordPress-in-Whitehall thing started, back in late 2007. As a relatively tiny department whose communications were almost exclusively news-based, a blog-style website was ideal for them. But I still remember nervously going into our first meeting, conscious that we were proposing something quite radical.
It all went remarkably well; ongoing support amounted to barely one phone call every 3-6 months, seeking advice or a quick template tweak. And of course, it sparked interest in WordPress as a platform which government could build on: you can draw a line from the Wales Office, to 10 Downing Street, to BIS, to Defra, to… well, who knows.
Two and a half years on, the list of Things We Really Ought To Do At Some Point was beginning to grow. And with the election leading to a change of government, it was high time we made some of those changes. We pushed the rebuilt sites live yesterday, for Puffbox’s second Whitehall department ‘relaunch’ in two days (after this one). Surely some kind of record?
The templates, originally designed to fit 800×600 screens, have been rebuilt from scratch – but hopefully, very few people will even notice. Once again, the brief has been to keep it looking almost exactly as-was… understandably, in the current conditions.
The main new function is an automated Photo Library, exploiting WordPress 3.0’s image handling. The Wales Office team have always been very good at adding photos to their press notices; but thus far, they were manually resizing them for on-page display. Now they can upload the highest resolution available, and let WordPress resize accordingly. And we can present a set of paginated search results listing all uploaded images, linking to those high-res versions, for media to re-use if they so desire.
It all lives in a WordPress 3.0 multisite (and multi-language) setup, including my first step into theme and plugin internationalisation: the same theme creates both the Welsh and English sites, with WordPress dropping in any Welsh translations from a .PO file. We’re using the somewhat outdated Welsh language pack available from automattic.com; late in the day, I discovered a new translation based on WP3.0, but integrating it (and undo’ing my workarounds) was too much to take on by that point.
And because we’re in multisite mode, it’s an easy job to move all the material from the previous government into an explicit archive site – keeping it all searchable, unlike the National Archives copy.
It’s been interesting to revisit what was my first major WordPress project: a milestone by which to measure both my own development, and WordPress’s. Some of my more, ahem, ingenious workarounds can now hand over to proper, core WP functions; but with features like the Photo Library, I feel we’ve pushed things just a little further again.
A hearty ‘diolch’ to Dean at Eduserv for the server-side stuff; and to the Wales Office team, who keep letting me play with their material.

6 thoughts on “Wales Office gets a WordPress refresh”