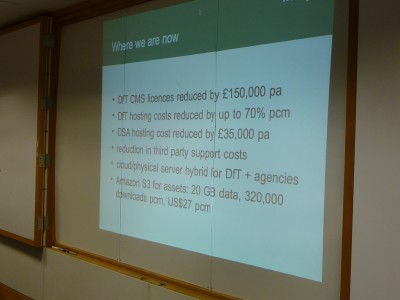 [Thanks to @JonAkwue for suggesting a vastly improved headline for this piece…]
The big moment of this year’s Word Up Whitehall came in the second presentation of the day: Gavin Dispain from the Department for Transport, telling the story of their hasty migration to WordPress.
It was already clear that we were in very different territory from last year’s inaugural event: Stephen and Francis from Health had opened with a presentation featuring the kind of technical architecture diagrams you just don’t see at WordCamps. We weren’t just talking about the potential for government departments to use WordPress, or sharing examples of little microsites they’d built: no, this was real corporate-sized heavy-duty stuff. And there, at the heart of it, increasingly so in fact, was WordPress.
Then came Gavin, and that slide. He didn’t really make a big deal of it. I think we all knew about the potential to generate massive savings. But there it was, in black and white: hundreds of thousands of real pounds, not notional pounds, saved at a stroke. With further savings to come, as more arms-length agencies come on-board. (Defra are a bit further down that track already, as David Pearson related later in the day.)

Technical architecture diagrams. PowerPoint slides with incomprehensibly large numbers on them. Weren’t these precisely the things which drove me out of ‘proper’ IT, and into the world of WordPress? What the hell were these doing at a WordPress event? For a moment I could feel myself switching off, as I’d done in countless meetings over the years.
And that’s when it all suddenly fell into place.
I’d reacted against such things in the past, because they were visions of the future – and for the most part, futures that never quite arrived. But something was different here. People weren’t talking about how they could or would do it. They were demonstrating how they had done it. Health had built that structure, and it was working. Transport had left behind one set of contracts costing £X, and were now in a new arrangement costing £Y.
To be frank, systems admin and accountancy can be a bit boring. But it’s a mark of the success of the WordPress mission1, and the potential it has unlocked, that we’re now into that business-as-usual territory. When you’re getting stuck into the ‘boring’ bits, that’s when change is really happening.
And it turns out, I don’t actually hate technical architecture diagrams and budget forecasts after all.
1 When I first drafted this, I wasn’t sure about using the word ‘mission’. But then, by sheer coincidence, Seth Godin posts a few lines on his blog, and I feel a whole lot better about it.

2 thoughts on “When WordPress gets boring, things get interesting”