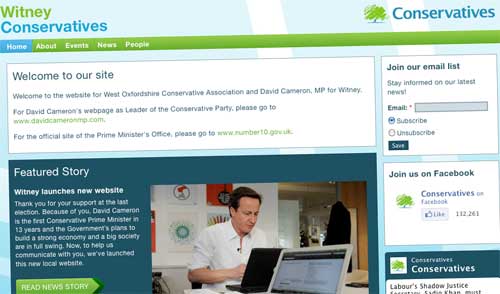 I see the Conservatives have followed in the footsteps of both Labour and the LibDems, in offering a ‘website in a box’ service to local constituencies. Known as Bluetree – not to be confused with website developers bluetree.co.uk* – it’s based on Drupal (plus multi-site management add-on Aegir) and was developed by the UK’s self-proclaimed Drupal specialists, ComputerMinds. It promises ‘state-of-the-art technology … at a cost well below market rate’ – although there’s no (publicly visible) indication of precisely what that cost is.
It’s taking a little while to find its feet, judging by the first few examples I’ve come across – including WitneyConservatives.com, the constituency of one David Cameron. But the basic structure is obvious: about, events, news, people. Everything’s on brand, naturally, with promo boxes for the (national) party’s Twitter and Facebook accounts; and there’s a nice little arrangement, presumably RSS-based, to pull national news in from conservatives.com. The design is clear, if a little lacking in warmth.
It’s a reasonable idea, but they need to be careful not to fall into the same traps as the Labour and LibDem party offerings: both of which have had widespread takeup, driven primarily by rock-bottom pricing, without winning the hearts and minds of party members and activists. Remember this tirade against Labour’s retained agency, Tangent? And I’m told there’s disappointment among LibDems at Prater Raines’s last relaunch, although it hasn’t seeped into the public domain.
In case you’re wondering, the Tories’ last grand Drupal project, myconservatives.com, has been displaying an ‘under construction’ message for at least the past few weeks.
* I did get in touch with bluetree.co.uk to ask if they were aware of this; but didn’t get a reply in time to include it here.