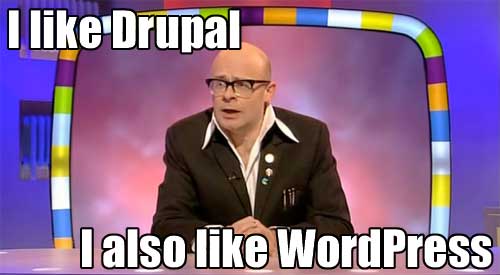 Things are happening on the Drupal front. There’s a new drupal.org website up today; and the first beta of the long-awaited v7 emerged a fortnight ago. I hear talk of Drupal-based projects and proposals in the vicinity of Whitehall, including various staff moves. There may be big announcements on the immediate horizon.
It’s been a while since I ventured into Drupal – so I downloaded the v7 beta, to give it a spin. And whilst it looks a bit prettier than previous versions, it still feels like the same old Drupal underneath. A rather tortuous installation process, requiring much chown’ing and phpmyadmin’ing, and manually shifting files from folder to folder. And at the end of it, an empty shell, with little guidance as to what you might do next.

Let’s just imagine for a moment that you want to start creating a page. You click on the ‘Add content’ button, which now lives in an admin bar across the top of the page. This generates an overlaid window offering various content types: choose one, and you end up on an authoring screen – with no WYSIWYG text editor. That’s right – out of the box, you’re expected to code your own pages in HTML.
Of course, you can have WYSIWYG: but you need to add it as a plugin – er, sorry, module. You can choose from a dozen different WYSIWYG editor functions, all of which have various benefits and drawbacks. And then, you’re probably going to have to put them in the right folder manually.
This rather encapsulates the Drupal mentality. Perhaps you’re someone who gets very worked up about the use of one particular WYSIWYG component over another: well, Drupal gives you the choice. And for a certain type of person, that’s just what you want.
The WordPress mentality, on the other hand, favours sheer simplicity. Install WordPress, and a WYSIWYG component is already installed. (TinyMCE, since you asked.) It’s more than satisfactory. There are certainly a few things it could do better. But it looks and feels like Microsoft Word – and for the vast majority of my clients, that’s precisely what they want.
Geeks love Drupal; people love WordPress. The Drupal guys know this. In kicking off the Drupal 7 user experience process, Drupal founder and project leader Dries Buytaert wrote:

Drupal’s steep learning curve filters out far too many smart, motivated people who could benefit from Drupal. We see it all the time in the Drupal.org forums, in my “State of Drupal” surveys, on Twitter, when talking to customers, and on the web. Even though we’ve made significant progress with making Drupal easier to use, a lot of work is left to be done. With other content management systems such as Joomla! and WordPress making strides to catch up to Drupal in terms of development flexibility, if we want Drupal to remain competitive, we have a challenge we have to face: we need to create a user experience that makes it easier for people new to Drupal to discover all of its richness and power.

Oh – and which platform did the Drupal 7 user experience team use to blog their work? You’ll never guess. Leisa Reichelt writes:

We know Drupal is amazing and we love it … but unfortunately, for the time being, it is too broken for us to be able to do the work we need to do on this project at the pace that we need to do it. We don’t have time to ‘learn’ Drupal, nor the skills to bend it to our will (and make it look acceptably pretty), we can’t even get a blog post on the homepage. We appreciate all the offers of porting this blog over to Drupal, but to be honest, I really like using WordPress and nothing I’ve seen of Drupal makes me want to switch over at the moment.
We know that Drupal is not WordPress, and we have no intention of making it so, but using WordPress helps us get our work done faster and easier for the time being, and it helps us maintain perspective and distance – and for now those things are really important to us. But if, this time next year, this blog isn’t running on Drupal and if it doesn’t look amazing – then please come and shout #fail as loudly as you can. Because then you’ll be completely right, we will have failed.

That was written in March 2009. The blog is still on WordPress, by the way.
Leisa later hints at some of the underlying tensions in making Drupal more human-friendly:

Drupal developers are … the most important audience. What this audience wants is not Drupal as a product that (ordinary users) can use out of the box, they want a developer toolkit that gives them more and more flexibility and capability to build cool stuff, and to push Drupal way beyond the realms of a simple Content Management System. And so we have this tension. Drupal as a ‘Consumer Product’ and Drupal as a ‘Developer Framework’. Currently, the official direction is that the project is going to attempt to be both. I think this is a serious problem.
I know that for many people the idea of making a Drupal that (ordinary users) can love, making something that can actively compete from a UX perspective with the likes of WordPress, is a grand aspiration. So it is, but unfortunately I also think it is the wrong aspiration for Drupal core. The sooner we focus on the core target audience of Drupal core – the developers – and commit to making a user experience that supports them in their use of Drupal, the sooner we’ll really have actually achieved a really Great User Experience for Drupal.

Now let me be absolutely clear. Drupal is an excellent platform. Great things can be done with it. And on some levels, comparisons between Drupal and WordPress are pointless. They are currently aimed at different types of people, and different use cases – so it’s ridiculous to say that one is materially better than the other. Besides, they’re rapidly converging: Drupal with its UX improvements, WordPress with its custom post types etc. They can both do clever things like multisite installs. They both have thousands of user-created plugins/modules. They can both be whatever you want.
But if I were contemplating a large-scale decentralised publishing platform for mainly text-based information, there’s absolutely no doubt in my mind: it has to be WordPress. Our recent work with Defra is a perfect case in point: multiple independent child sites, with tweaked themes as appropriate to the subject matter, giving relatively non-tech-savvy authors considerable creative freedom and flexibility, within bounds permitted by a central administrator.
If you’re listening to the users of that platform, you’d build it in WordPress. If you’re listening to the geeks, you’d build it in Drupal. It’s your choice.