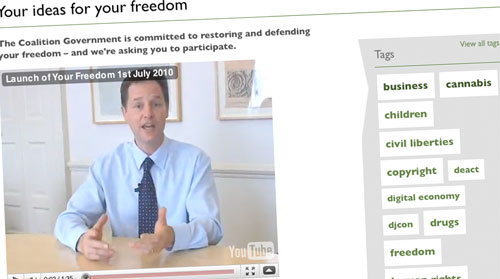 First it was the Programme for Government, then the public sector Spending Challenge… and now it’s Your Freedom:

We’re working to create a more open and less intrusive society through our Programme for Government. We want to restore Britain’s traditions of freedom and fairness, and free our society of unnecessary laws and regulations – both for individuals and businesses. This site gives you the chance to submit, comment on, or vote for ideas about how we can do this. Your ideas will inform government policy and some of your proposals could end up making it into bills we bring before Parliament to change the law.

As with the Spending Challenge, it’s a concept which the LibDems tried (to a certain extent) prior to the election: they published their proposed Freedom Bill online, and invited comments on it. So for once, with concrete justification, you can argue that the government – at least part of it, anyway – knows what it wants to come out of this consultation before it starts. (Indeed, the Cabinet Office press release is quite explicit, that it will result in ‘a Freedom Bill in the autumn’.)

Update: Mark Pack makes some excellent points re the original LibDem exercise. The ‘blank sheet of paper’ approach of Your Freedom is inevitably (?) leading to some crackpot proposals. The LD approach was much more focused: here are the key repeals we’re intending to make; please tell us if you think we’ve got the detail wrong and if there’s anything similar missing.

This time, the site is running on Delib’s Plone-based Dialogue App platform. We know this because somewhat unusually, Delib have included a namecheck in the footer of each page. Whilst Plone is open source, Delib’s code doesn’t seem to be; however, there’s some suggestion among various gov people on Twitter that there should be ‘positive’ news on that front shortly.
It certainly looks a lot like the design I cobbled together for the Programme for Government site – although this time, it looks like they’ve rebuilt it from scratch. I’m now slightly worried that, in the space of a couple of hours, I may have accidentally defined a common design framework for all such sites??
Worth noting that they have a tickbox on the registration page, asking for permission to ‘contact you by email from time to time’. No specifics on what ‘time to time’ means, but at least they’ve started the exercise with that opt-in so explicit – meaning there’s no discussion later on about whether or not it’s OK to ‘spam’ people. That’s a mistake we’ve made before.
And since I haven’t mentioned it already: I also see Nick Clegg now has a separate YouTube channel of his own – although as yet, no website to speak of. But please, if you’re going to embed YouTube videos on pages, don’t set them to autoplay. We don’t need another MySpace.