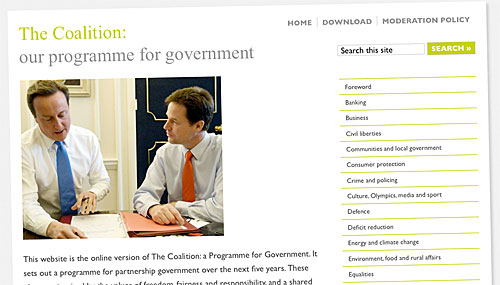 Out of the blue last week, I got a call from COI: was I available for an immediate, rapid turnaround WordPress job? I was a bit startled, and detail was lacking; but since this was precisely the kind of rapid-response thinking I’ve been trying to foster around WordPress for a couple of years, I couldn’t really say no.
As it turned out, the project in question was the Coalition Programme for Government: and the mission was to build a commentable version of it, by the next morning. COI’s initial proposal was to use Steph’s Commentariat as a base; but given the document’s structure, it didn’t feel like a good fit. Plus to be honest, I knew I’d be more comfortable working with my own code, as opposed to unpicking Steph’s – and time was too tight.
The theme came together fairly quickly, helped in no small part by the source document’s fairly plain design – which I basically mimicked, with a couple of tweaks for better web usability. Extracting the text from the supplied PDF was excruciating, as you’d expect. But by the time I got to bed at about 2.30am, having barely left the keyboard since lunchtime, the site was ready, and my part of the work was basically done. It went live at 9:30 the next – well, technically the same – morning.
Now… I’m going to skip over the next bit, because I’m not the right person to tell the story. Suffice to say, people came in their many tens of thousands. And although measures had been taken to handle the expected load, the platform wasn’t ready for quite that volume of interest.
But now, a couple of days older and wiser, the site has been re-enabled: and the comments are starting to come in. This in itself presents some interesting challenges: the document is, by its very nature, more party-political than most, and the comments will be too. The civil service’s usual get-out clause – about the government being democratically elected, on the basis of its manifesto (singular) – doesn’t really work this time. Thankfully, applying the moderation policy is someone else’s problem.
Of course it’d be nicer if things had gone perfectly smoothly on launch day. To some extent, we’ve missed the boat in terms of the immediate wave of interest; but arguably, the comments might be more considered, with the benefit of a weekend to reflect and cool off. (Well, not ‘cool off’ given the mini-heatwave, but you know what I mean.)
And regardless of what went wrong, there’s still a great story to tell, in terms of what went right. An interactive document, designed and coded from scratch, and delivered by bedtime. That’s why we love WordPress.