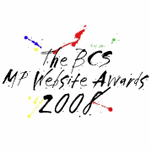 One thought on “No awards for MPs' websites this year”