A couple of (broadly) Labour-related online developments of note late last week.
One was the relaunch of LabourList, just in time for conference. Alex Smith has done great things editorially since taking control of the website in the wake of Drapergate, and entirely deserved the recognition of a high ranking in Iain Dale’s annual poll of the top political blogs. But the website has always been a bit, well, ugly (or indeed, well ugly) – like it was trying too hard.
The new look is a big improvement, primarily because it accepts the reality that it’s really just another multi-author blog. You get a straightforward two-column layout: content plus comments on one side, a site-wide sidebar on the other, with header navigation based (I guess) on tags. It isn’t spectacular in design terms, but it doesn’t need to be. (Mind you, I’m not sure about including everyone’s ‘gravatar’ on every page: that’s going to slow things way down, for everyone.) It’s still powered by the same mysterious Tangent Labs platform as other Labour output; I’m wondering why.
The other was the news that Sarah Brown, the PM’s wife had passed uber-geek Stephen Fry in terms of Twitter followers. As I write this, Mr Fry has 773,000 followers, Mrs Brown has 791,000. 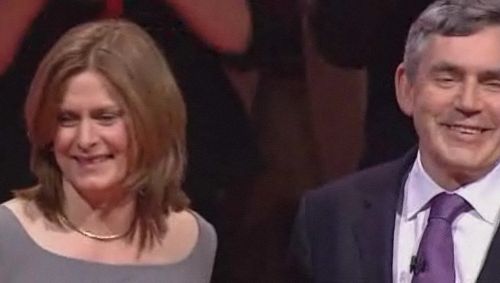 With no great fanfare in the conventional media, Mrs B has built quite a profile around her Million Mums campaign against ‘the needless deaths of women in pregnancy and childbirth around the world’, and other similarly lefty causes. It’s pretty clear she’s writing her own tweets personally, and gets actively involved in terms of replying, re-tweeting and hashtagging. It’s working, and she is often (rightly) used as a best practice example for public figures.
She also did a bit of blogging from last week’s G20 summit in Pittsburgh, again at wordpress.com – although I’m told there has been talk about bringing it properly ‘in house’; and has been contributing to the influential Huffington Post for some time.
Her activity is rarely Labour-branded per se… but of course it’s exactly a year since she sensationally appeared on-stage at the Labour conference to introduce her husband. (It’s quite amusing to look back at the BBC’s live text commentary from the day: ‘It’s almost time for the pre-speech video. Sarah Brown is in the hall. At the lectern. What’s going on? It looks like she is about to address the Labour conference.‘) Now articles are being written, describing her as ‘arguably the most admired and powerful woman in Britain… She might even be the last hope for Labour.’
Don’t underestimate the role her new media activity has played in this.

2 thoughts on “Who says Labour people can't do web?”