A subject which keeps coming up in conversation just now is the planned merger of ‘normal’ WordPress with WordPress MU, the ‘multi user’ version. There’s been both excitement and concern at what it might mean: but the latest report from Jane at WP HQ should be enough to calm anyone’s worst fears.

It was announced at WordCamp San Francisco last year that WordPress and WordPress MU would be merging codebases. This has now happened in 3.0-alpha, and we’re working on smashing bugs and tidying up a few screens. If you’re currently using a single install of WordPress, when you upgrade to 3.0 you won’t see any of the extra screens associated with running a network of sites. If you’re currently running MU, when you upgrade you’ll notice a few labels changing, but upgrading should be as painless as usual. If you’re going to set up a new WordPress installation, you’ll be asked as part of the setup if you want one site or multiple sites, so that’s pretty simple. If you want to turn your single install into one that supports multiple sites, we’ll have a tool for you to use to do that, too. So if you’ve been worried about the merge, have a cup of chamomile tea and relax; it will all be fine. 🙂

It’s quite a relief to see how they’re planning to manage this: most existing users of ‘normal’ WP won’t even see the new functionality, but if they want to make use of it, there’ll be a way to do so. Any impact will be seen by the existing MU user base, but as it’s a more complex product by definition, they should be better able to cope with any changes. That seems like the perfect solution all round.
The feature I’m personally most excited about? Never more having to refer to ‘ordinary’ WordPress, ‘standard’ WordPress, ‘WordPress solo’, ‘non-MU’… 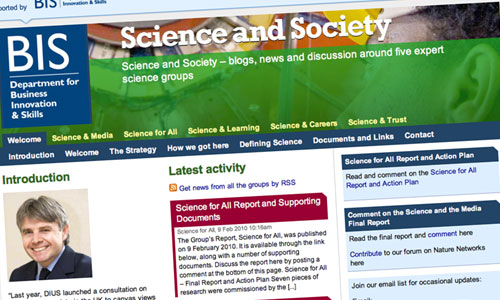 A few months back, I helped the Department For International Development set up an online consultation site for their white paper on Eliminating World Poverty. We used WordPress (obviously), plus Steph Gray’s Commentariat theme (with a few tweaks). The site was well received, and had close to 500 reader comments, many of them lengthy. So when a new consultation came along, into DFID’s plans to spend £8.5bn on education in developing countries, I’m delighted to say they were keen to do it again.
This time, we’ve done it slightly differently – creating a reusable platform for online consultations, instead of just another one-off site build. Rather than use the Commentariat theme itself, I’ve built a generic DFID-styled theme to fit almost seamlessly into their corporate look and feel; but the defining elements – reverse-dated posts in categories, the floating comment box – are still there.
And significantly, we’ve moved from ‘normal’ WordPress to a WordPress MU (‘multi user’) installation. This brings several important benefits for DFID:

Now having said all that, working with MU isn’t without its issues. Historically it didn’t get quite the same love and attention that ‘normal’ WordPress got; although to be absolutely fair, the delay between ‘normal’ releases and the matching MU releases has been cut right down. Some of its processes and language could be clearer: for example, when is an admin not an admin? When he/she’s a site admin, of course. And how do you make someone a site admin? You type their username into a text box under Options, naturally. (That took me a l-o-n-g time to figure out.)
Coincidentally, as I’m writing this, I get a tweet from COI’s Seb Crump: ‘@simond what’s the tipping point for considering WPMU? Plans for maybe up to 3 blogs eventually, but their launches spread over next 2+years‘
For me, it’s not particularly about the number of blogs being managed: it’s about the convenience of using the single installation. If those benefits I bullet-listed above are of interest to you, then MU is worth doing even if you’re only planning on having two blogs. Particularly in a corporate context, it means you can delegate quite a lot of responsibility to individual staff or departments, whilst still being able to wade in as and when. (And with automated upgrading now built-in, I’d say that’s a bigger issue now than it was previously.) But be warned, MU does have a learning curve. Even as a (normal) WordPress veteran of several years experience, it still beats me sometimes.
But in a 2+ year timespan, it ultimately won’t matter. It was announced in late May 2009 that ‘the thin layer of code that allows WordPress MU to host multiple WordPress blogs will be merged into WordPress’; I don’t believe there’s a confirmed timetable for it, though. That should mean that the MU elements get raised to the same level of perfection as in the ‘normal’ product: unquestionably a good thing, I’d say.
Anyway, back to the DFID project. I’m delighted with the first site to be built on the platform: and the DFID guys have done a great job dressing it up with imagery – it makes a huge difference. But the really exciting part, for me, will be seeing the next one get built. And the next one. And the next one.