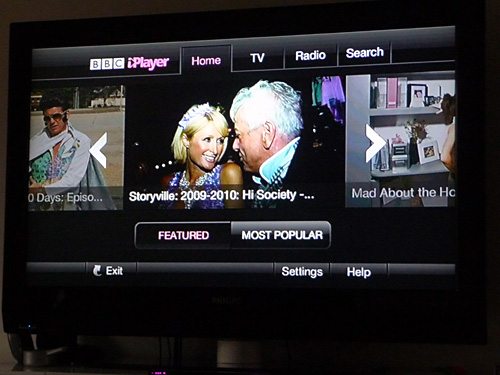 The BBC’s new iPlayer ‘app’ for the Wii is now available for download: and it has the potential to do amazing things to UK viewing habits.
Thus far, if you wanted to watch iPlayer via your Nintendo Wii (and your wireless broadband connection), there was a web-based interface, not dissimilar to iplayer/bigscreen – which was fine, but not without its issues. Like for example, if you wanted to watch full-screen – which, of course, you would – you had to do a manual zoom-in on the playback window, and even then, it wasn’t quite right. Then came the upgrade to the Wii’s web browser… and iPlayer broke, for some reason.
Instead, there’s now a free iPlayer ‘channel’ available for download from the console’s Wii Shop. The interface is much the same: which, to be honest, is a bit disappointing. I can appreciate the desire to maintain consistency across all broadcast platforms, but the Wii could surely do a lot more than others. But it works fine, so no real complaints.
The TV playback? Fantastic. Better image quality than before (I think): not as good as a Sky Digital signal, but certainly good enough. Seems more reliable playback too. And yes, hurrah, proper full-screen viewing.
Of course, the Wii version falls a bit behind the Virgin Media cable version, which already boasts HD-quality. But it’s worth noting how big a success iPlayer has been on cable; Virgin credited its arrival as being ‘a real tipping point in consumer understanding of on-demand’. I wonder if the same can happen with the Wii (and other games consoles) as platforms for delivering online content?