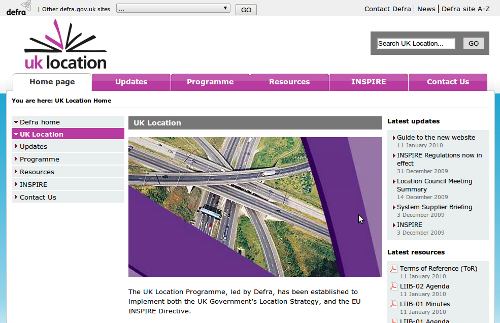 One department making steady steps into WordPress has been Defra: it started with a ‘public beta’ blog on third sector issues late in 2008, then a Commentariat-based consultation in mid-2009. I’ve been working with them since late last year, and the first fruits of that relationship are now starting to appear.
First to go public is a microsite for the UK Location Programme – which you probably won’t have heard of, but is all about EU-wide interoperability in geographic data, so it may well be of interest. They needed a website which they could manage themselves, rather than through the central Defra web team; and were open to online consultation methods. Ideal WordPress territory, in other words. 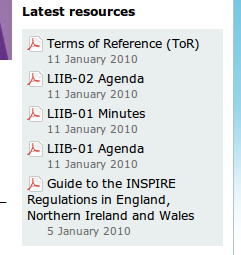 The site is closely modelled on the Defra corporate site, even going so far as to use the same base stylesheet. Behind the scenes, it’s the usual combination of WordPress posts and pages, with the former handling news updates, and the latter everything else. Inevitably we were looking at lots of downloadable PDFs and Office documents; so I’ve done a custom ‘widget’ to display the latest file uploads (excluding images), with the appropriate filetype icons.
The human element on this one could be interesting too. The project’s communications manager is an iPhone owner; and we’ve already experimented (successfully) with him updating the site via the excellent WordPress iPhone app. All being well, you’ll never notice; but it opens up all sorts of possibilities.
The site is sitting in some modestly-priced ‘sandbox’ hosting space, and came together in less than a week. In quite a few respects, it’s more advanced than the main Defra site; and I’m hoping they’ll see how WordPress could help at the top level too. Watch out for at least one more Puffbox-Defra collaboration in the next few weeks.