Back from the Christmas break, and thoughts are turning to the second annual UK Government Barcamp at the end of the month. I’m told the venue is about to be confirmed; and already we’re seeing people concerned at not being able to get a ticket, despite the fact ‘tickets’ haven’t yet been released. Regardless, it’s probably a good time to start thinking about what I’m going to talk about.
I guess people are expecting a session from me on WordPress, and what I’ve been doing with it lately. But I did a fairly generic session on the same subject last year, so I’m trying to think of a new angle on it. And anyway, the amount of times WordPress comes up in conversation these days, with government colleagues and others, maybe people know enough about it now. Or maybe that’s just the conversations I tend to have.
So, dear readers, over to you. Is there anything you’d like me to talk about? I can demo the new v2.7 interface, which many people won’t yet have seen. I can do a walkthrough of any (or all) my recent work, if that’s helpful – be it technically or editorially focussed. Maybe something about use of WordPress in the longer term: upgrading, hosting, extending. Or if people would value a ‘from the very basics’ session, I’m happy to oblige. Let me know in the comments, or contact me directly.
And if I may, I’d like to throw out a few ideas for sessions I’d like to attend myself.

I’m also planning to use the Barcamp as an excuse to redesign puffbox.com, subject to other commitments in the next few weeks. The work-in-progress design is, let’s say, quite dramatic; everything more or less in the same place, but very different ‘screen furniture’. You have been warned. 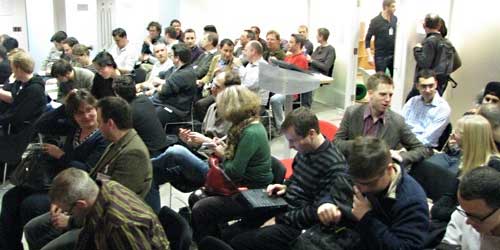 At the time, January’s BarcampUKGovWeb felt like a breakthrough moment. Civil servants, specialist consultants, activists and volunteers coming together – on a Saturday, crucially – to share ideas and experiences, with the common objective of improving government web activity. And you know what? Looking back on it, you can trace so many good things from the past year, be they tangible deliverables or just personal connections, back to Barcamp. It worked.
So let’s do it again. 🙂
Announced last week by Tom Watson, we’ve set a date of Saturday 31 January 2009 for the second UK government Barcamp, and it’s great to see so many people rushing to sign up already. It’ll be the same basic Barcamp mix of talks, demos, discussions and (no doubt) drinks… with an expectation that everyone comes prepared to contribute, and ideally, to lead a session of their own. The more informal, the better: just stand up, and tell us about something you’ve done lately. And the truth is, in the past year, we’ve all done a tremendous amount worth talking about. This is our chance to share what we’ve learned.
If you’re reading this blog, you’re the sort of person who should be coming along. Simple as that.