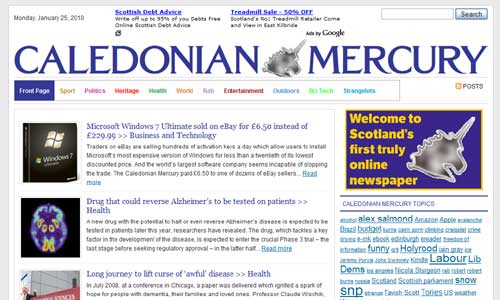 A hearty congratulations to Stewart Kirkpatrick whose project to launch a new online national newspaper for Scotland got off the ground at the weekend. It’s called the Caledonian Mercury, and its rather ambitious mission statement is ‘to revive Scottish journalism by using the internet rather than railing against it.’
If you remember the days when, inexplicably, The Scotsman was one of the best online news sources on the planet – that was Stewart. I met him when I spoke at a conference in Edinburgh; he had moved into a small online startup, but was clearly still a news man. And looking back over his blogging in the last year or so, you can see how he’s reached this point: one track extolling the virtues of WordPress (well, usually), the other seeing an opportunity to reinvent the news business.
So here it is then, the CalMerc. A fairly straightforward WordPress build, using an off-the-shelf news-y theme – with a bit of customisation, and a healthy dose of plugins. I can see a few rough edges to be smoothed out, and it’s all fairly modest in design terms: but as they told one critical tweeter, ‘behaviour first, design second’. Couldn’t agree more.
So Stewart – all the best, big man. If anyone can do it, I’m pretty sure you can.
PS: Other WordPress-powered newspapers are available – Bristol 24-7 springs to mind as a similar online startup; the Express & Star came to WP after 120-odd years in print. There may be much more to come if the Press Association has its way.