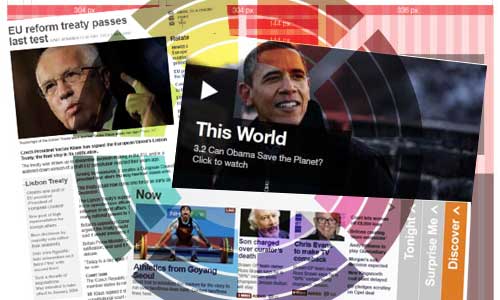 There’s a fascinating (and lengthy) post on the BBC’s internet blog, setting the scene for a forthcoming ‘post-2.0’ redesign of its web presence. It’s a design geek’s paradise – global visual languages, grid systems, typography and colour palettes.
Intriguingly, they start their potted history of the BBC website with a screenshot from December 1997. My own memories go further back, to the days when the BBC’s URL was bbcnc.org.uk – and one particular landmark in page design. White with a dark blue left-hand column; some kind of HTML table magic. Groundbreaking in its own small way.
Pretty soon, all websites looked like that – many, no doubt, deliberately doing so because if it was good enough for the BBC, it was good enough for them. So it’s a pretty big deal when they now announce that they’re ‘moving away from left hand navigation to consistently placed, horizontal navigation across the site.’
I haven’t designed many sites lately which used any kind of conventional left-hand nav; but I have built a few sites which integrated into existing ‘look and feel’ which did still have left-hand nav – and it felt very strange. Blogs and the ‘tab’ metaphor have effectively killed it off.
Another interesting trend from the Beeb’s work-in-progress is the overlaying of big headline text on imagery. For an organisation which produces so much imagery, it’s a fairly obvious thing to do: and it may ‘raise the bar’ for other sites with pretensions to similar scale. Pages without pictures are going to look pretty dull in comparison.
And it looks like we’re going to see a conscious effort to underline the real-time aspects: I note the various mockups marked ‘ADDED 3 MINS [ago]’. Again, if you’re running a large website and you aren’t demonstrably keeping your core content similarly up-to-date, you’re going to look bad – and risk losing trust.
If you want to know what your website will look like in a year or two, have a peek. Do I like it? Yes, yes I do.

This week saw the next phase in the incremental redesign of the Department For International Development‘s website. It’s a much airier, brighter look than before, and with a YouTube video front and centre, plus all those drop shadows, rounded corners and various JQuery effects, it feels bang up to date. There’s a new ‘top layer’ of public-friendly information, Fighting Poverty, which is very easy on the eye, without getting in the way of the more mundane operational stuff. They’ve struck an excellent balance, I think.
The changes to the parent site meant we had to revisit certain elements of the DFID Bloggers site, built and launched by Puffbox just a couple of months back; partly for visual consistency, but also because we’re feeding off the same CSS stylesheet. Everything’s more or less where it was before, but the colours have been brightened up a bit, and taking a lead from the parent site, we’re now optimised for 1024px-wide screens. We’ve also tweaked a few other things, but I doubt you’ll notice them.
(The parent site has repaid the compliment by giving front-page space to the Bloggers site – but before anyone mentions it: no, it isn’t automatically taking the latest item via RSS, they’re choosing which items they want to promote.)
On the Bloggers site at least, the switch on the night was remarkably pain-free: just a simple matter of changing from one WordPress theme to another, literally a single click and it’s done. I’ve always seen this as one of WordPress’s hidden strengths – and I’ve talked to one or two clients about making deliberate use of it. You can imagine a scenario where there are several versions of the same basic design, all stored as separate WP themes, for different situations and circumstances – as a crude example, a black-tinged ‘national mourning’ version. Deploying it would take seconds. Hey, can your big ugly CMS do that, I wonder?
The DFID team are taking an incremental approach to their web development – and good on them for it. There are further ‘structural changes and technical improvements’ planned for 2009, plus – all being well – some cool new functionality in the Bloggers site. Stay tuned.

The new Mirror website is a dramatic improvement. But then again, all previous Mirror websites have been terrible – particularly the last one, launched just 18 months ago.
As Martin Stabe notes, the site’s homepage takes an unfamiliar building-blocks approach… which, in this case, I really find myself warming to. It suits the kind of picture-heavy, celebrity-led material within. Dig a little deeper, and frankly it’s fairly average – but for the Mirror, as I say, that’s a big step forward.
Meanwhile, I can’t quite make my mind up about the Telegraph’s new design, being rolled out gradually this week, section by section. It’s very nice – structurally and visually; and fixes some of the things I didn’t like before. But it feels very – can’t think of a better word – conservative. There’s no hint of a ‘2.0’ feel to it whatsoever: no rounded corners, no colour gradients, no Javascript effects, no glossy icons. No homepage space for the ‘community’ or multimedia stuff. There are ‘sharing’ links, and links to related blog content, but it’s all downplayed.
You could argue that this is all good. It’s in keeping with the more conservative brand demographic. It’s classic rather than fashionable. But it’s, well, a bit retro. And with everyone rushing to be more ‘2.0’ than their rivals, that feels just a bit odd.

The new Department of Health site is a definite improvement; the previous incarnation looked like it had been designed primarily by the technical side (which, indeed, it had). Now it’s all colourful boxes with rounded corners and shaded colourings, and it’s all the better for it. All this without breaking links, apparently.
Well done to them for trailing the new design in a ‘coming soon’ page, made available for a couple of weeks before the changeover. And even better, I love the review of old designs. I wonder how many of us kept screengrabs of old sites? I know I’ve lost all trace of some previous ‘masterpieces’.