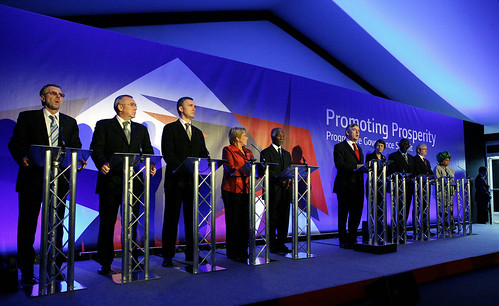 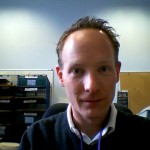 It’s been a bit of a bumpy ride, as you may have picked up from stories on other blogs, but we’ve finally got the Progressive Governance summit microsite ready for the start of proceedings tomorrow morning. The discussion papers are up, the comment facility is switched on, the live streams are configured and ready. And my alarm is set for 5am. 😕 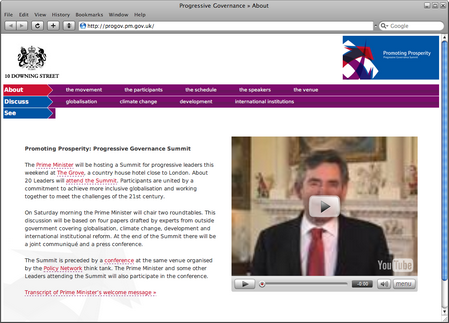 I’m not sure if I’m excited or nervous at the prospect of the ‘live blog’. I’ve done similar things in equally high profile situations, running the live text commentary for a couple of Mr Brown’s Budgets whilst working at Sky News (1998, I think – wow, ten years ago)… but I’m effectively appointing myself the Prime Minister’s Online Spokesman for the day, which is kind of nuts now I think about it. And very trusting of them.
It’s bound to attract more than its fair share of malicious and frivolous participants. But it’s a first, certainly in UK government, and almost certainly globally (unless you know better?); and it’s another innovation to add to the list. I’m particularly looking forward to using the CoverItLive tool. Full report to follow, naturally.

Over at the Telegraph, Mick Fealty rightly reflects on the ‘fascinating confluence of ideas cascading into the body politic at the moment’, with both right and left suddenly making an issue of innovation, open source, and all that good stuff. The latest contribution was David Cameron’s speech at NESTA this morning:

Indeed, the odd thing about the Government’s innovation policy is how un-innovative it is. More spending, more state control, more reliance on the levers of bureaucratic intervention. The chapter on public sector innovation in Government’s “science innovation” document, has this as its centrepiece: the proposal to create a “Whitehall Hub for Innovation”. Something about that doesn’t ring true. Whitehall and innovation don’t go together, for the simple reason that innovation is the product of many heads not a few, and free thinking not state control.
We accept that innovation requires a culture of risk-taking, of trial and error, of flexibility in thinking and often of collaborative effort. So I have also asked Adam Afriyie to identify ways a Conservative government could tackle the corrosive sense of risk-aversion which holds back innovation within our society.

To be fair, it’s been an uplifting week in terms of online innovation, across the political divide(s). The sudden rush into Twitter – by No10, and (apparently) by both major parties – isn’t a big deal in terms of audience numbers, but it’s certainly symbolic: a recognition that there’s clearly something interesting going on, and a readiness to just get stuck in.
I’m hoping that the weekend’s Progressive Governance summit microsite, which I’m constructing on No10’s behalf, can take that momentum forward. We’re throwing as many 2.0 tricks into the mix as we can: some will undoubtedly work better than others. (And yes, as Guido helpfully notes, we’re cutting it fine. We know.)
But the value of the social connections fostered by blogs and Twitter is already revealing itself. Last night I talked about my search for a live blogging / chat solution. Paul Bradshaw suggested CoverItLive, a service I hadn’t seen before. I played around with it, and it looked great. But I wanted to see what others thought – so I threw out a plea for assistance on Twitter. Within a couple of minutes, I had two friends in the ‘chatroom’ with me, giving the product a proper test. It passed – and it’s looking like we’re going to use it on Saturday morning to ‘live blog’ the summit’s proceedings. This stuff works.

Fresh from its success with Twitter, 10 Downing Street is preparing for a weekend of social media experimentation, in association with Puffbox.
This Saturday, Gordon Brown is hosting a gathering of around 20 left-leaning world leaders under the banner of Progressive Governance, to discuss globalisation, climate change, development and international institutional reform. (It got a brief mention in yesterday’s monthly press conference, but you’d be forgiven for missing it.) With the renewed appetite for online experimentation at Number 10, I was asked to put together a microsite for the event – running on WordPress, and incorporating a few ‘web 2.0’ tools and tricks.
The site went live late this afternoon – sort of. There’s very little to see so far: the supporting materials, and our ideas of what to do with them, are still coming together. In fact, I fully expect to be coding up new templates and functions live on the day. I know rapid development has become a bit of a Puffbox trademark, but we’ve never cut it quite this fine before. 🙂
The centrepiece will be a live video stream of the proceedings, with a text commentary / discussion thread alongside. You could call it ‘live tweeting’, but we’re probably not going to use Twitter (tbc though). We’ll be posting the conference’s discussion papers for online viewing, with the opportunity for you to post your comments alongside. We’re hoping to get photos beamed into the site from the conference venue, via Downing Street’s new Flickr account; their well-established YouTube channel may also come into play. As may anything else which crosses my mind in the meantime.
It’s an ideal opportunity for innovation: a one-off, relatively low-profile event, not exactly on the scale of a G8, but still significant enough to be taken seriously. The ludicrously tight timeframe is forcing us to make rapid, almost instinctive decisions: in my book, that’s a good thing.
If you’re interested to see what we make of it, believe me – so am I. It all happens on Saturday morning, with the live proceedings due to wind up in the early afternoon. With Arsenal-Liverpool Round Two kicking off at 12.45pm, I’m relying on my fellow Gooner, David Miliband to ensure things stay on schedule.