It seemed like fun. A quick jaunt over to Paris, to attend their first WordCamp proper. A chance to put my French to its toughest test in 17 years. A chance to attend a WordCamp as an ordinary punter, rather than as an organiser. And a good opportunity to check up on the neighbours.


Paris has a well-established barcamp-style event each year, and will continue to do so, but was (according to host Amaury Balmer) the only country in the world not to have a formal WordCamp. And as if to underline the increasing professionalisation of WordPress, they decided to hold it on a Friday, starting at 9:00am. Or effectively, if your brain has only just got off the Eurostar, 08:00am. Thankfully, black coffee was provided.
First speaker of the day, appropriately enough, was Michel Valdrighi – you’ve probably never heard of him, but he’s the Frenchman who ultimately gave WordPress to the world.

Michel was an early convert to the joys of blogging, but couldn’t find a platform which ticked all his boxes. A month after he wrote his first lines of PHP code, to create a dictionary of the Corsican language, he started on his own blogging platform – Blogger 2, or b2. A version 1.0 release was written, but never released; then came unemployment and a bout of depression, and he walked away from it all. Which led to a conversation between this guy and this guy, which led to… well, you can probably pick the story up from here yourself.
And then – ironically – having set the day’s wheels in motion, Michel more or less disappeared. A shame, as I was dying to hear more. (I believe he returned for the social side later, but I’d gone by then.)

Francis Chouquet was up next: a web designer who also has a premium themes business (Peaxl), and has written a book on WordPress development. He talked about the market for premium themes, where apparently 2/3 of purchases are by resellers; and why he had ultimately opted to build a team to create premium themes, and a custom platform from which to sell them.

His key point was that a theme shop needed distinct skills: creative, technical, marketing and support. You had to have a fighting spirit to make it work, he explained; but it was important not to lose the pleasure which made you do it in the first place.

He was followed by Julio Potier, who gave a very assured talk on theme and plugin vulnerabilities, and how not to get caught by them. He listed the various well-known plugins he’d found issues in, even certain security plugins! – and described the various levels of interest shown by the original developers. Some were grateful for the tipoff, some were hostile, some simply weren’t bothered. Cautionary tales a-plenty.
With each slot lasting a full hour – not something I’m planning to recommend for future UK events, we were already nearing lunchtime. Next up was the youthful Aurélien Denis, who runs French-language tutorial site wpchannel.com, talking about recent WordPress enhancements which made it more of a CMS. People were wrong to say WordPress was a system conceived for managing blogs, he concluded; in fact, it was much more than that.

I very nearly spoke up at that point; personally, I think the fact that it was conceived for blogs is precisely what makes WordPress what it is, and we should be embracing that fact, rather than trying to argue it away. A normal CMS is designed to be managed by a trained sysadmin, and built by experienced developers. (cf Drupal) WordPress assumes you’re on your own, and you just want to get on with writing something. Which is almost always the case, even in large organisations like government departments.
We broke a little early for lunch, and given the (frankly unforgivable) lack of wifi at the venue, I went in search of free connectivity and good food. I couldn’t find anywhere visibly offering both in the immediate vicinity; probably just as well, as I really fancied a moules-frites, and it wouldn’t have gone well with my iPad.

First after the restart was Benjamin Lupu, who runs the WordPress-based digital operations of a publishing company targeting the public sector. In his excellent talk, he reviewed their work to integrate WordPress with their various other systems: subscriptions, email marketing and so on. There was initial reluctance at the thought of using a blogging platform, but the work came in under budget, handled the huge traffic levels, did everything they wanted, and provided a much more journalist-friendly experience than what had gone before. His only complaint was the lack of a built-in search engine in WordPress core; but it’s not as if there aren’t better, more focused open source solutions which could be easily bolted on.
And so to our gold sponsor for the day: Microsoft. Yes, yet another WordCamp sponsored by Microsoft. Things didn’t start well, with Pierre Couzy failing to get his PowerPoint slides to project properly, unlike earlier Mac and Google Docs-based presentations. (Sorry, a cheap shot, I know.) And although he had a lot to say about Microsoft’s efforts to engage with the product and the community, you just knew he would get a hard time when it came to questions.

I’ve heard the ‘we love open source really’ speech from numerous Microsoft people over the past couple of years. (Usually followed by ‘And we hate IE6 as much as you.’) I’m not as hostile to it as I once was. They now have numerous free downloads and services to help make WordPress work on Windows; and whilst you mightn’t choose to use Microsoft’s products in your WordPress project, sometimes it’s forced upon you. At least they’re helping… although you sense it’s with at least half an eye of monetisation in future, probably based on cloud hosting services.

Final presentation of the day was a double header: Nicolas and Benjamin from WordPress specialists beAPI (Amaury’s consultancy), talking about ways to improve WordPress performance. I thought I’d have heard it all before, but they came it at from unexpected angles, and I still picked up a few new tips. 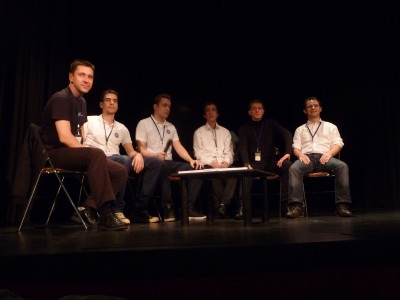 The day finished with a ’round table’ Q&A, featuring all the day’s speakers (apart from Michel). The questions seemed rather negative, fearful, suspicious. Was the growth of Tumblr a cause for concern? Did the panel think ‘they’ would ever make WordPress paid-for? Why do ‘they’ bundle a paid-for plugin like Akismet with the free core product? It rather confirmed a feeling I’d had throughout the day, that the community in France felt distant from the core WordPress effort, in a way which we in the UK just don’t. Perhaps it’s the common language; perhaps we’re just that little bit longer-established, and more confident as a result.
It proved to be a fascinating day, not least for the cultural differences. With so much of the jargon being in English, the presentations sometimes felt like they were being delivered simultaneously bilingually: and it took me a little while to tune into the Frenchified pronunciation of English terms. (It took me ages to work out what ‘Apash’ was.) And then there are the English terms which don’t match the terms we use: le back-office, for one. 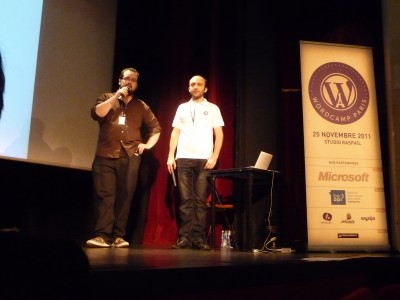 Félicitations to Amaury and Xavier for such a well-run event; and merci for the steady supply of coffee and cakes. Here’s hoping the event inspires an even stronger, more confident WordPress community on the other side of la Manche.