My post on the new Open Government Licence prompted a quite reasonable question from Carl Morris: ‘I’m looking for a reason why they’re launching a new licence rather than just using straightforward Creative Commons?‘ Perfectly reasonable question.
So I was delighted to see a response from Beth Brook at the National Archives – late on a Friday evening, I note, explaining precisely why. It’s such a good answer, it deserves a post in its own right.

As you’ll see the OGL is a very similar to Creative Commons and Open Data Commons, as we felt they really good models examples to work from. We did look extensively at adopting Creative Commons licences and worked with Creative Commons through the process. However, we developed our own licence for a number of reasons, and I’ll try to cover the main ones below:
– We needed the licence to cover both copyright and database rights – Creative Commons covers copyright only and Open Data Commons covers database right. Having two licences apply side by side to a large proportion of the information being published by the public sector would be overly complex for the user and for the public sector doing the licensing. The OGL is one licence which covers a wide range of information and content types protected by copyright and/or database right, including source code.
– We needed a licence that can cover all jurisdictions in the UK, including Scotland, Wales, England and Northern Ireland – the Creative Commons UK licence is still forthcoming.
– We wanted the licence to be a simple as possible under one set of terms and conditions rather than having a simple summary on the surface and lengthier, more complex conditions underneath this. The OGL presents summary examples (in the ‘You are free to:’ section), as well as the more legal necessities in just one licence document.
– We have ensured that the OGL is compatible with Creative Commons and Open Data Commons attribution licences.

Further proof, not that we need it, that the National Archives team really are on the side of the angels on this one. I’m so delighted that sheer simplicity was a good enough justification. 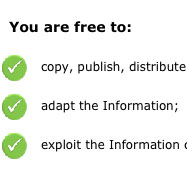 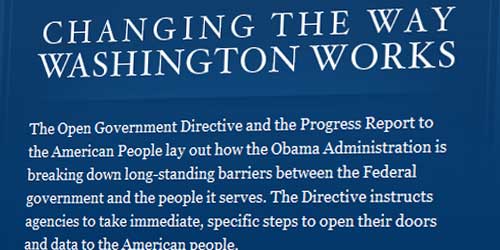 The Obama administration’s long-awaited Open Government Directive was published on Tuesday – curiously, in PDF, TXT, DOC and Slideshare, but not HTML? – and seems to have received a warm welcome across the Atlantic.
What’s quite interesting is its very prescriptive approach. Within a specified number of days, specifically 45, they must have identified and published three new ‘high quality’ datasets in open formats. Then, by day 60 (ie 6 February 2010), each department must have created a new page on its website on open government issues, at a specified URL: http://www.[agency].gov/open. This page must include mechanisms for public feedback and quality assessment; a plan for ‘how it will improve transparency and integrate public participation and collaboration’, to be updated every two years; the annual FOI report; and regular responses to public input. (I’m almost surprised they haven’t offered a wireframe for the page.)
The document goes on to outline what it expects to see in each departmental openness plan, including of particular interest:

Very specific measures, milestones and expectations – plus mandatory innovation across the board. Would it work here?
For more, read TechPresident.com’s analysis of the directive, and its implications.