I feel somewhat obliged to highlight the latest blog post by Stephen Hale, head of digital at the Dept of Health. As regular readers will know, Stephen switched the department’s web publishing strategy over to WordPress just over a year ago, and he’s written subsequently about the joy of making such a move.
The countdown is now well and truly ‘on’ for government’s move to its new bespoke web platform: in less than a week, Directgov and BusinessLink will have been switched off. Government departments’ corporate sites will make the transition over the next few months: initially as ‘islands’, but reaching a critical mass ‘in around February’, according to the Inside Inside Government blog. A post on another Health blog quoted a completion date of April – and that certainly tallies with conversations I’ve had.
All of which leaves Stephen in reflective mood.

In DH, since we switched our main content management tool for dh.gov.uk to WordPress, we’ve expanded the range of people who can publish DH content. We’ve been able to do this because it’s now dead easy for people to do it. WordPress removes complexity for the editor – form relates to function pretty well.
As a result the digital team spend much less time publishing than we once did, and less time training and supporting editors. So we are able to focus more of our effort on ambitious uses of digital for health and care, and our policy engagement work.

– which is exactly the message I have been pushing around Whitehall for several years. How great to see it reflected back on a *.gov.uk website.
Stephen’s post closes:

I’m expecting [with] the publishing tools for the Inside Government bits of GOV.UK … our editors won’t need a manual and a training course to do their jobs. From what I’ve seen, it’s looking good.

Is it just me, or is that a veiled threat? 🙂 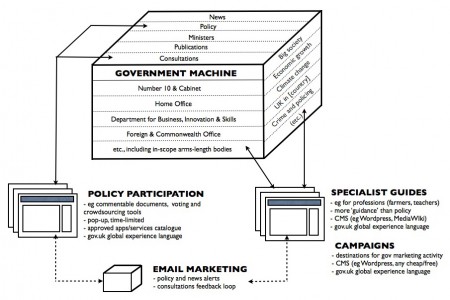 In which Simon makes the case for the ‘government machine’ (in the diagram above), for government departments to publish fairly basic written information about their work, to be built on something which already exists, instead of being built ‘from the ground up’. If you haven’t already, do read Neil’s piece… then Stephen Hale’s piece about the Department of Health’s new approach… then read on. And do please note the line about ‘Seriously, this isn’t about WordPress.’
It won’t entirely surprise you to learn that, when Neil Williams’s blog post about government web publishing in the world of a Single Domain popped up in my feeds, the first thing I did was press control-F, and search for ‘wordpress’. And hooray, multiple mentions! Well, yes, but.
Some background, for those who need it: Neil is head of digital comms at BIS, currently ‘on loan’ to the Government Digital Service team, to lead the work exploring how government departments fit into the grand Lane Fox / Loosemore / Alphagov vision. A ‘hidden gem‘, Tom Loosemore calls him – which seems a bit harsh, as Neil has been quite the trailblazer in his work at BIS, not least with his own web consolidation project. It’s hard to think of anyone better placed to take up this role.
With that track record, it’s happily predictable to see Neil reserving a specific place for WordPress (and the like). More generally, the vision – as illustrated in the diagram reproduced above – is sound, with the right things in the right places. There’s so much to welcome in it. But there’s one line, describing an ‘irreducible core‘, which stopped me in my tracks:

a bespoke box of tricks we’ll be building from the ground up to meet the publishing needs most government organisations have in common, and the information needs ‘specialist’ audiences most commonly have of government.

Here’s my question for the GDS team: why bespoke? why ‘from the ground up’?
It’s a decision which requires justification. ‘Bespoke’ invariably costs more and takes longer. It will increase the risks, and reduce the potential rewards. It would also seem to be directly in breach of the commitment Francis Maude made in June 2010, to build departmental websites ‘wherever possible using open source software’. Were all the various open source publishing platforms given due consideration? Was it found to be literally impossible to use any of them, even as a basis for development?
Let’s assume WordPress and Drupal, the two most obvious open source candidates, were properly considered, as required by the Minister. Let’s assume contributions were sought from people familiar with the products in question, and just as importantly, the well-established communities around them. Both are perfectly capable of delivering the multi-view, multi-post type, common taxonomy-based output described in the ‘multistorey’ diagram. Both are widely used and widely understood. So why might they have been rejected?
Did the team spot security or performance issues? If so, wouldn’t the more responsible, more open-source-minded approach be to fix those issues? Then we’d all see direct benefits – on our own personal or company websites – from the expert insight of those hired by our government. If things are wrong with such widely-used technologies, whether inside or outside government, it’s already government’s problem.
Or were there particular functions which weren’t available ‘out of the box’? If so, is it conceivable that someone else might have needed the same functions? Local government, perhaps – for which the GDS team has ‘no plans or remit‘. We’re seeing plenty of take-up of WordPress and Drupal in local government land too. They have very similar needs and obligations as regards news and policy publication, consultations, documents, data, petitions, biographies of elected representatives, cross-cutting themes, and so on. Why not make it easy, and cheap, for them to share in the fruits of your labours?
But I think it goes wider than different tiers of government. Government is under a moral obligation to think about how its spending of our taxes could benefit not just itself, but all of us too.
Even if this project’s bespoke code is eventually open-sourced, the level of knowledge required to unpick the useful bits will be well beyond most potential users. Given that it’ll probably be in Ruby or Python, whose combined market share is below 1%, it won’t be much use ‘out of the box’ to most websites. A plugin uploaded to the WordPress repository, or a module added to Drupal’s library, would be instantly available to millions, and infinitely easier to find, install and maintain. (Well, certainly in the former case anyway.)
I can’t help thinking of the example of the BBC’s custom Glow javascript library, which does simplified DOM manipulation (a bit like jQuery), event handling (a bit like jQuery), animations (a bit like jQuery), etc, proudly open-sourced two years ago. It appears to have attracted a grand total of 3 non-BBC contributors. Its second version, incompatible with the first, remains stuck at the beta-1 release of June 2010. Its Twitter account died about the same time; and its mailing list isn’t exactly high-traffic. I’m not convinced it ever ‘unlock[ed] extraordinary value out there in the network‘. Proof, surely, that open-sourcing your own stuff isn’t the same as pitching in with everyone else.
Seriously, this isn’t about WordPress – although that’s unquestionably where the Whitehall web teams’ desire path leads. It’s not really even about open source software. It’s about government’s obligation to the citizens and businesses which fund it. It’s about engaging with existing communities, instead of trying to create your own. Acknowledging people’s right to access and make use of the data – erm, sorry, the code – whose creation they funded. Any of that sound familiar?
There’s so much right about the picture Neil paints. And maybe I’m reading too much into a single line. But the idea of building yet another bespoke CMS to meet Whitehall’s supposedly-unique requirements seems to be three to five years out of date. And it didn’t work too well, three to five years ago. Or three to five years before that. Or…

Anyone who finds Neil Williams’s 20-page Twitter strategy especially newsworthy clearly hasn’t spent much time inside Whitehall. Then again, with Parliament having just closed for its summer holiday, I guess the Westminster hacks had to find something to keep themselves busy.
So anyway, a week ago, Neil published a template for a departmental Twitter strategy on his own personal website, and on the Cabinet Office’s new Digital Engagement blog. Somebody in SW1 finally spotted it – the Guardian? Press Association? – then next thing you know, it’s everywhere. Incidentally, well done to the Daily Mail for inventing some extra details – it wasn’t ‘commissioned’, Neil chose to ‘open source’ the piece he produced for his own purposes for the benefit of colleagues elsewhere in government.
Yes, Neil’s document is lengthy; and he admitted from the off that it would seem ‘a bit over the top’. But if exciting new tools like Twitter are to make it through the middle-management swamp of the Civil Service, they need to be wrapped in boring documentation like this. Whether or not it ever gets read, mandarins need to feel that your Twitter proposal has received the same proper consideration as the other (weightier?) items on their to-do list. ‘Dude! This is so cooool! We should so be doing this!’ will not get you very far.
Getting government to do cool stuff is 50% actual doing, 50% creating the opportunity for things to get done. Neil’s document is aimed at the latter; and it would seem to have served its purpose already. Thanks Neil.
By the way… This provides an interesting case study in how news is made. It only becomes ‘news’ when one journalist notices. Then everyone else writes almost identical articles, usually based on the Press Association piece. Then it makes the broadcast media – starting with the Today programme. Expect the TV channels to follow suit later today.

On reflection, if you’re going to put two of the most forward-thinking people in e-government into the same department, great things are probably to be expected. BERR (as was)‘s Neil and DIUS (as was)‘s Steph put their heads together on Monday afternoon, and on Wednesday, they launched a new corporate website for the newly-created Department for Business, Innovation and Skills. It’s based on WordPress, with a bit of RSS magic, and the help of a few (free) web-based tools. And it’s brilliant.
Steph documents the work with characteristic modesty:

It won’t win any design awards, and the downside to Heath Robinson web development will no doubt be some quirks in reliability. But happily, we can say we haven’t spent a penny on external web development or licencing costs, and we got something up within 3 days. Compared to the static, hand-coded site DIUS had for the first 18 months of its life, it’s a start, and a little bit innovative too.

Actually, I like the design: it’s forcibly simple, but that’s no bad thing, and is something they should try to maintain in the long run. There may be quirks; but that doesn’t make it any worse than some of the £multi-million CMSes in Whitehall. Yes of course it’s work in progress, but isn’t everything – or rather, shouldn’t it be?
I can’t think of a better case study for the power of open source, web tools, pretty much everything I bang on about here. And if my work for the Wales Office was any kind of inspiration, I’m delighted to have been a part of it.
Oh, and just for the record… that’s now the Prime Minister’s office and the Deputy Prime Minister First Secretary of State’s department running their websites on WordPress. I’m just saying… 😉