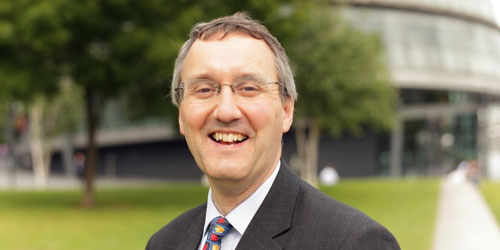 It’s with some regret that we note the end of Puffbox’s winning streak, as regards web work for political candidates.
Thus far, every client who has stood for election to a political office of some kind has been successful. But our run came to an end on Friday night, with the announcement that Mike Tuffrey had fallen just short in his bid to win the Lib Dems’ nomination for London Mayor. Brian Paddick came top on first preferences by just 57 votes; in the head-to-head second round, after transfers, Paddick took it by 91. (In case you’re wondering, Lembit Opik finished bottom of the poll, with just 8% of first preference votes.)
It’s a bit of a shame, as we had some really nice enhancements ready to go on Mike’s website tomorrow morning: think MailChimp plus Gravity Forms plus a custom post type and taxonomy, with a bit of ajax magic on top. Some nice design work from my regular collaborator, Matt Budd. (Oh, there was also talk of a weather-sensitive homepage; but we ran out of time.) But whilst they won’t ever go live as we envisaged last week, I’m sure they will appear online in some form or other, in projects to come.
Well, maybe not the weather-sensitive homepage.
It’s been a fun project to work on, and has taken me into areas I hadn’t previously explored in much depth. Many thanks to Mike for having us on board; and for giving us so much creative freedom throughout.
Now… I wonder what technology brianpaddick.com is running on? 😉 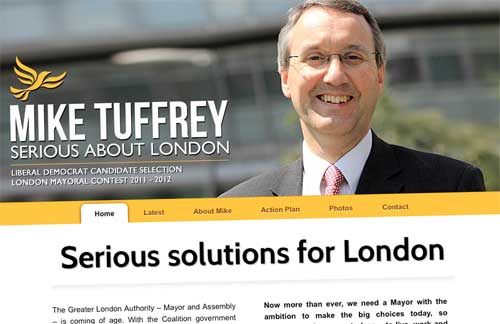 Today saw the launch of Liberal Democrat member of the London assembly, Mike Tuffrey‘s campaign to secure the party’s nomination for 2012’s Mayoral contest. Puffbox has been working with Mike for the last couple of weeks to put together a digital package that’s fairly modest for now, but with scope for expansion depending on how the party membership votes in August.
There isn’t much to say about the technical side of the new website: it’s a fairly straightforward WordPress custom theme, with posts for timely content, pages for background, and a custom homepage template. There’s an automated photo gallery, where you can access the full-size versions of any images uploaded to the site, but that’s about as clever as it gets. But it does everything it should, and all hangs together nicely.
The design is a bit of a departure, though: bigger, bolder and more vertical than usual, influenced to a significant extent by iPad apps. I’ve been particularly keen to experiment with presenting the text in columns, using a custom plugin which reclaims the WordPress ‘more’ button (which nobody ever uses). With the initial tranche of content, there aren’t too many examples of this, but you’ll have to trust me; it’s there.
Of course there are issues with columns on the web: they only really work when there’s ‘the right amount’ of text per page, with the column height fitting the (likely) screen resolution. Of course, this is where the iPad, and indeed the Kindle, benefit: you know exactly what screen size you’ll be dealing with. On the web, there’s no such luxury, so we can only base it on assumptions. But my instinct is that the benefit to readability makes it worth the risk.
Supporting the website, we’ve sorted out Google Apps accounts for the campaign team; and there’s a Mailchimp-based mailing list, only doing RSS-powered alerts for now, but with scope for specially-written mailshots in due course. Thinking ahead, we’re asking people to indicate where they live in London, which will allow us to run geo-targeted campaigns further down the line.
Now… thus far, Puffbox has a 100% record with political candidates: everyone we’ve built a site for has been successful in the electoral campaign they were fighting. Mike faces competition for the LibDem candidacy from Lembit Opik, with rumours of one or two others throwing their hats into the ring before nominations close at the end of the week. Of course, if Mike wins this initial contest, you wouldn’t perhaps be too confident about us preserving our perfect record against both Boris and Ken. But Mike’s keen to make full use of online in his campaigning; and his position as the inevitable underdog might give us scope to have some fun with it.
The result of the candidate selection is (currently) due to be announced on 12 August. Will it be glorious?