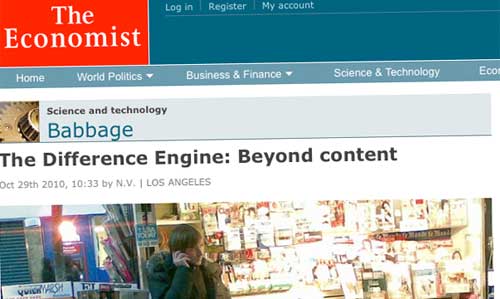 There’s nothing explicitly technological in the announcement today by the National School of Government that ‘the Sunningdale Institute has established an Innovation Hub to develop know-how on stimulating and supporting innovation in government and the public services’ – as announced in the DIUS Innovation Nation white paper. (See Steph’s interactive version.) But since the Hub’s raison d’etre was to ‘capture and disseminate learning about public sector innovation’, it would seem insane for there not to be some kind of electronic communication component.
The press release, not yet on the NSG website (?!), says the Hub will ‘carry out research and consultancy, network formation and active learning events for departmental leaders, develop corporate mechanisms that will help incentivise innovation, and look to international government interventions that seek to support more innovative government.’ Um, I’m sure that all sounds great. Let’s see where it goes.
So it’s not the online innovation hub I’d hoped for, when I saw the headline. I still think there’s a role for such a group, perhaps along the lines of the Economist’s Project Red Stripe group: six people given six months, and a six figure budget to do something cool and web-based. It’s worth downloading the project wash-up they wrote at the end of last year, describing the lessons they learned for such initiatives.

Two articles in what looks like a special edition of the The Economist this week, which sum up exactly where e-government falls down. In ‘Government offline‘, they write (rightly):

Governments have few direct rivals. Amazon.com must outdo other online booksellers to win readers’ money. Google must beat Yahoo!. Unless every inch of such companies’ websites offers stellar clarity and convenience, customers go elsewhere. But if your country’s tax-collection online offering is slow, clunky or just plain dull, then tough.

Indeed. But in the same edition, ‘The electronic bureaucrat‘ notes, just as correctly:

In the online world, government is competing for users’ time and attention with beautifully designed sites that are fun to use. The government’s offering, says Mr Markellos (of PA Consulting), “has to be massively attractive”.

In other words: government is in competition, but (generally) only indirectly. So consumers steadily develop an understanding of how great things can be; then come up against government services with no particular incentive to be great. And since they’re fundamentally stuck with the government (or perhaps more accurately, the civil service) they’ve got, their only available response is to disengage. All of which leads the Economist to a depressing conclusion:

The examples of good e-government in our special report have a common factor: a tough-minded leader at the top, willing to push change through against the protests of corrupt or incompetent vested interests. It would be nice to think that democracy would do that, concentrating voters’ preferences for good government and creating an electoral ratchet in favour of modern, efficient public services. It hasn’t happened yet.