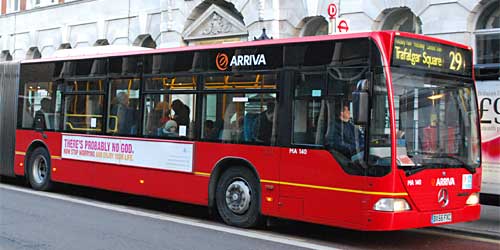 Just over a year ago, we had the startling success of the Atheist Bus Campaign, which raised over £150,000 to put the message ‘There’s probably no God, now stop worrying and enjoy your life‘ on the side of London buses. And, given the surplus funds, buses up and down Great Britain. An online-orchestrated grassroots campaign, with individuals chipping in a few quid for a political gesture.
Fast-forward to this weekend, and the least festive Christmas Number One Single ever, with Rage Against The Machine’s foul-mouthed tirade seeing off a sweet Geordie teenager – solely on the back of download sales. Again, a large number of people, orchestrated online, chipping in their 29-99p for a political gesture. Of sorts. Well, political in the widest possible sense.
I’m talking to a few MPs at the moment about improving their websites ahead of next year’s election, and one recurring subject is political donations. On the face of it, they’re being most optimistic. The biggest news story of the year has been the way MPs have fleeced the public purse to fund their moat-cleaning and duck-houses. I don’t see queues of people outside constituency offices, all eager to hand in their campaign contributions.
But it seems it can work. Iain Dale observed at the weekend that Tory candidate for Bristol East Adeela Shafi is successfully raising funds through the MyConservatives.com site: over £1,000 towards her notional target of £1,500, apparently within 3 days. How? Iain suggests:

I suspect most of the donations were in the £5-£20 bracket. If you make it easy to donate, people will do so, if you give them a reason to.

…which is probably true; but he also hints at the significance of #kerryout, a Twitter-orchestrated attempt to unsettle, if not unseat, Labour’s ‘Twitter tsar‘ Kerry McCarthy. It’s supposedly independent; but that’s somewhat hard to justify when its hastily produced website includes a huge link to Adeela Shafi’s MyConservatives page for donations. And I wonder how the concealment of the domain name’s ownership sits with election imprint rules.
So anyway, what can we learn from this?
Getting detailed data on RATM’s sales breakdown or MyConservatives donations wasn’t going to be easy; but helpfully, virtually all the donations to the Atheist Bus Campaign were listed on the JustGiving website: so I did some hasty number-crunching. And here’s what I found:

So that’s a very small number of very large contributions representing a high proportion of the total raised; but still, over a third – that’s well over £50,000 – coming from donations of £10 or less. (Not that it’s any kind of sensible comparison: but the Obama campaign raised 38% of its funds from donations of $200 or less; the Atheist Bus raised 78%.)
But for me, the two uniting factors across these three success stories are as follows:

If you were hoping for any tangible conclusions, I’m sorry to disappoint. But there’s definitely food for thought in there.